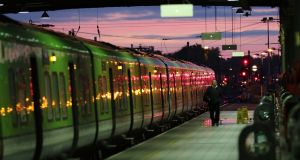 A man in his 20s has been arrested during a Garda operation at Connolly train station in Dublin. File photograph: Nick Bradshaw

Gardaí believe a firearm they seized yesterday was intended for use in Northern Ireland for an assassination attempt as part of the Kinahan-Hutch feud.

One of the Kinahan gang is hiding out in the North having survived recent efforts to murder him.

Two people were arrested in Dublin’s north inner city yesterday in an operation that yielded the firearm. While the investigation into the seizure was last night in its early stages, gardaí believe the gun was destined to be taken to Belfast by train.

The gun was found and two suspects – a man and woman – were arrested .

Gardaí moved in on a man at Connolly Station, Amiens Street, in Dublin 1, and seized the firearm at 3.15pm yesterday. The suspect, who is in his 20s, was taken to Store Street Garda station. He was being questioned last night under Section 30 of the Offences Against the State Act.

In a follow-up operation, a woman was arrested at Dublin Airport. She is a close associate of a gangland figure who was the intended target of a botched gun murder bid in Dublin recently.

Gardaí believe the gun seized yesterday was to be used to kill a well-known member of the Kinahan gang in Belfast. He is currently on bail on serious organised crime charges and a Dutch court is just about to decide whether he should be jailed on firearms offences.

However, after returning from Holland to Dublin while awaiting the decision from the Dutch courts, he decided to relocate to Belfast. He did so over fears the Hutch gang was conspiring to kill him as part of the Kinahan-Hutch feud.

The 29-year-old has been warned his life was in danger, a key factor in his relocation recently to Belfast. He has been under surveillance by the PSNI and was recently seen meeting other Dublin criminals in a Belfast hotel.

The investigation into him by the Dutch authorities is nearing a key stage that may result in a prison sentence within days.

Gardaí believe the Hutch gang was trying to murder him ahead of his likely arrest by the PSNI or the Garda for extradition to the Netherlands if a jail term is imposed.

Yesterday’s operation involved members of the Special Crime Task Force, established in reaction to the Kinahan-Hutch feud. Also involved were members of the Garda National Drugs and Organised Crime Bureau and the Armed Support Unit.