How Paul Williams came to appear before Charleton tribunal

Background: Crime journalist was in contact with Ms D over Maurice McCabe claim 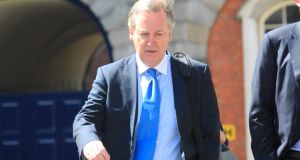 The veteran crime journalist Paul Williams told the Charleton tribunal that he was never briefed negatively about the Garda whistleblower Sgt Maurice McCabe.

The tribunal is examining whether a false allegation of digital rape of a minor, made against Sgt McCabe, was used by Garda management to discredit him, and Williams said the first he heard of the claim was earlier this year, after it was broadcast on RTÉ’s Prime Time.

In 2013 the digital rape allegation was wrongly included in a counsellor’s report on “Ms D”, who had made a much milder complaint against the whistleblower back in 2006.

When notifying the social services about the 2006 complaint on the mistaken impression that they had not heard it before, counsellor Laura Brophy included an allegation from a different client about a different alleged perpetrator. She made a cut and paste error, she has told the tribunal.

On Monday, Ms D and her parents gave evidence of their shock when they discovered, via the Garda, in 2014, that Ms D’s original complaint had erroneously been transformed into an allegation of rape.

The parents said they initially feared the report might be true and was something their daughter had been holding back from them. Ms D said she was “livid” when she found out what had happened and took immediate steps to have the mistake corrected.

A number of Garda officers are to give evidence from Wednesday as the tribunal shifts towards examining how McCabe’s employers dealt with the erroneous rape allegation. They were notified about it by social services in 2013, following Brophy’s catastrophic error.

Williams said he interviewed Ms D in 2014 after he was contacted by her father, who is a garda in Bailieboro, Co Cavan.

By this stage, two journalists had knocked on the door of Ms D’s family home, so someone had told the media about the history, so to speak, between Ms D and McCabe.

The journalist denied any suggestion that his visit to interview Ms D in her family home was in any way linked to an “orchestrated campaign” or that he had ever been briefed negatively against McCabe by Garda management.

Mr D has said he got Williams’s number from Garda colleague Det Supt John O’Reilly, who was known to both.

Subsequent to the interview, Williams said, Ms D contacted him and asked him to help her get in contact with Micheál Martin, which he did. He wrote articles about her meeting with the Fianna Fáil leader. Ms D’s focus at the time was in securing an investigation into how the Garda had treated her 2006 complaint, which had not resulted in any charges.

Williams also said he helped Ms D get in contact with Alan Shatter, who had resigned as minister for justice arising from the controversy that surrounded the handling of McCabe’s whistleblower claims.

Two days after the meeting, Shatter spoke in the Dáil and called for the unidentified Ms D case to be investigated.

“She wanted to meet him because he had lost his job,” Williams said.

He said he had arranged meetings for others in the past in this way and denied the suggestion that he was “agitating” for Ms D or that his activities were inappropriate for a journalist. He did not contact McCabe, he said, because he wrote about the 2006 allegation without identifying either party.

Williams said he was aware of an allegation to the tribunal that he had been shown the 2006 file on McCabe, and said it was “completely and absolutely without truth”.

He said he took an Independent Newspapers videographer with him to the 2014 interview so that there would be a record of what was said by Ms D.

He never briefed any senior garda about the interview. He had not worked on the McCabe story prior to the interview, nor was he involved much afterwards. He couldn’t say where he heard the vague rumours that were around at the time.

“They were just there,” he said.

“That’s not the way it would happen with me,” he said.

The vague rumour was that McCabe had a grievance, that his complaints about Garda malpractices had not come “just out of the blue”, and there was a lot of “bad blood in Bailieboro”.

Supt Noel Cunningham, who investigated the 2006 complaint, is the next scheduled witness.