McCabe complained about garda who went to suicide scene from pub 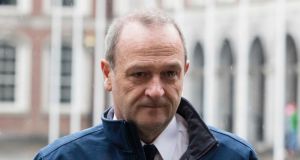 Supt Noel Cunningham: told the Disclosures Tribunal that Sgt Maurice McCabe “became a thorn in his side”. Photograph: Eamonn Farrell/RollingNews.ie

Sgt Maurice McCabe complained about a Garda colleague after the man and two other officers arrived at the scene of a suicide in Co Cavan having been drinking in a pub beforehand, the Disclosures Tribunal has heard.

The complaint led to the Garda colleague being disciplined. Some months after the complaint, the man’s daughter, who is being called Ms D, alleged that Sgt McCabe had sexually abused her as a girl.

Sgt McCabe, the tribunal was told, has said that the Garda investigation of the alleged child sexual abuse “changed his life completely” and that he “trusted nobody” afterwards.

The tribunal is investigating whether senior Garda management directed a smear campaign against Sgt McCabe as a result of his whistleblowing activities.

Supt Cunningham said he had not been the subject of complaints about his work up to 2007 but that in subsequent years he had been, and that he believed Sgt McCabe had been involved in them. The complaints were deemed to be unfounded.

He said that he personally had nothing against Sgt McCabe but that he did not think that was true about Sgt McCabe’s feelings towards him.

“If you are thinking badly about somebody you are only diminishing yourself,” he said when asked if he had an attitude towards Sgt McCabe. He later agreed, however, that Sgt McCabe became “a thorn in his side”.

Patrick Marrinan SC, for the tribunal, asked the witness about his report to the director of public prosecutions in which Supt Cunningham included details of the funeral in January 2006 of a man who had been stabbed by his son, a youth known to the Garda. Mr D, then a sergeant, attended the funeral with two colleagues, after which they went back to work. Later they went to a pub and consumed alcohol.

While they were in the pub they learned of the suicide of a different young man known to Mr D and his colleagues. They went to the scene in a highly emotional state and were a cause of embarrassment when they had to be removed by Sgt McCabe, who was there in a professional capacity.

Sgt McCabe reported what had happened to his superiors, and a disciplinary tribunal led to Mr D’s being transferred from the crime unit to regular uniformed duties.

The tribunal also heard that in a note kept by Rhona Murphy, a social worker who was seeing Ms D at the time, she recorded Supt Cunningham’s comment that Ms D was “spinning different stories”.

He said he “totally and absolutely refuted” any suggestion that his feelings towards Sgt McCabe affected his actions in 2013 when he received a letter from Tusla, the State child and family agency, seeking a meeting to discuss the McCabe case. He said he put the letter in a file and forgot about it. “I was dealing with live matters. This file was closed in 2007.”

He told Michael McDowell SC, for Sgt McCabe, that there was nothing on the letter to alert him to the fact that it was connected with a new, erroneous allegation against Sgt McCabe. The sergeant was a prominent figure in the media by this time, but he, the witness, forgot about the letter.