Man accused of raping Spanish student was out on bail 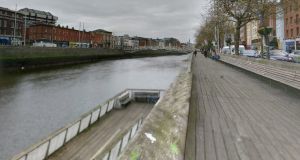 The suspect and victim met by chance on the boardwalk area along the Liffey river. Image: Google Street View

A man accused of falsely imprisoning and raping a Spanish student in a tent in Dublin brought her on a circuitous route out of the city centre, apparently in an effort not to be recognised by gardaí.

The man had been ordered to stay away from a city centre location as part of bail conditions that relate to another offence he is currently charged with.

Gardaí believe the man, who is in his 20s, crossed the Liffey river with the woman (18) at the East Link bridge as he feared officers who knew him might stop and question him about his movements.

Detectives believe he won over the woman by “charming her into going off with him”, all the while intending to turn on her.

When arrested and questioned on Monday he denied the allegation of rape. There was insufficient evidence to charge him over his role in what Garda sources said was a “horrific” ordeal outlined by the woman.

The student was in Dublin on Saturday afternoon when she had a chance encounter with the man on the Liffey boardwalk. He told her he wanted to take her to Sandymount and she agreed to go.

They travelled by Luas into the docklands area and then went to an area near flats at Pigeon House Road where the woman has alleged she was repeatedly raped in a tent on Saturday and Sunday.

The suspect in the case, who has lived a transient lifestyle, fell asleep and the student managed to escape and raise the alarm at a nearby house.

Gardaí in Donnybrook were alerted and a criminal inquiry began, with the suspect arrested on Monday. He was taken to Irishtown Garda station and questioned under section 4 of the Criminal Justice Act, which allowed for his detention without charge for up to 24 hours. At that end of that period it was deemed there was insufficient evidence to bring criminal charges.

The inquiries, including securing the results of forensic tests, will continue and a file is being prepared for the DPP.

The student, who has been joined in Ireland by her parents, was traumatised when she raised the alarm but was able to guide the Garda to the place where she says the attack happened. Some of the information she supplied led to the arrest of the suspect.

In recent years the suspect avoided a jail sentence for a very serious public order crime and has numbers other public order convictions. He has since come to the attention of gardaí for the serious crime for which he is on bail awaiting trial.

Taoiseach dramatically sacks Barry Cowen as minister over drink-driving controversy 07:14
Cowen ‘surprised and disappointed’ after being sacked on the phone by Micheál Martin 06:57
Covid-19: Overseas visitors are causing ‘stress and anxiety’ in some areas, TDs say 05:10
Three visitors investigated by Garda after refusing to fill in locator form 04:45
Irish peacekeeping veterans sue the State over ambush of convoy in Syria 03:01