Garda associations may advance their own pay claim

GRA says it is coming under pressure from members 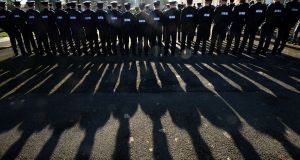 Sources in the GRA, which represents more than 10,000 rank-and-file gardaí, confirmed its executive meeting would discuss the nurses’ proposal. Photograph: Dara Mac Donaill

Gardaí are examining whether they can use the terms of the new proposals that led to the suspension of the nurses’ strike to form the basis of new pay claims of their own.

The fall-out from the nurses’ pay deal is expected to feature prominently at meetings of the national executives of the two largest Garda staff representative bodies, the Garda Representative Association (GRA) and Association of Garda Sergeants and Inspectors (Agsi) which are due to begin two-day meetings in Dublin this morning.

While neither association commented publicly last night on the new Labour Court recommendation that saw the postponement of three days of planned industrial action by nurses this week, sources in both organisations were forthright in their appraisal.

“We’ll be studying this closely and if there is anything in this deal that we can pursue for our members, we will be under pressure to pursue that,” said one source in Agsi, which represents over 2,000 sergeants and inspectors.

Another Agsi source said the proposed measures for nurses that created a new nurses grade was a clear effort to try to block other public service unions making claims for increased remuneration based on any nurses’ deal.

“But we have a lot of change going on in the Garda, we have divisional policing being rolled out,” the source said.

“The divisional model means a lot of new responsibilities for many of our members. That’s one area we will be looking at. But we’ll be reviewing all of it very closely.”

Sources in the GRA, which represents more than 10,000 rank-and-file gardaí confirmed its executive meeting would also discuss the nurses’ proposal.

“There has been a lot of talk on the ground already from members saying if nurses are to be paid more then there could be implications for us,” said one well-placed source within the GRA.

He added that due to the latest developments in the nurses’ pay row, the GRA executive was under pressure from members around the country to ensure every opportunity for a pay claim would be pursued.

Gardaí secured a €50 million pay boost in November 2016 after they threatened an unprecedented strike.

On foot of the Garda deal, the Government was forced to pay out an additional €120 million in accelerated pay rises for tens of thousands of other State employees to protect the overall public service agreement then in place.

The knock-on implications for the Government from the nurses’ deal are likely to become clearer after the public service committee of the Irish Congress of Trade Unions meets to consider the issue next week.

However, a number of union leaders privately believe that those who argued to members that the only money available was that set out in the public service agreement have been left in a difficult position on foot of the nurse deal proposals.

A number of union leaders also believe the industrial peace clause in the public service accord is now dead as following the Government’s decision not to apply financial penalties to nurses for going on strike – as it did to second-level teachers in 2016 – it could never credible threaten to apply sanctions on any other group for breaching the accord.