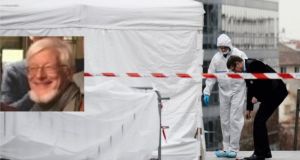 Edited image: Forensic police in front of the main entrance of the Pôle Universitaire Léonard-de-Vinci where John Dowling (inset), a 66-year-old teacher from Ireland, was stabbed to death. Photograph: Philippe Lopez/AFP/Getty Images

A 66-year-old Irish lecturer was killed in front of students from the university where he had taught for 20 years in the Paris suburb of Courbevoie on Wednesday.

A former student, a Pakistani citizen aged 37, who was expelled from the school last year is in police custody in connection with the killing.

The victim has been identified as John Dowling, who taught English and international relations at the university. The Department of Foreign Affairs is providing consular assistance.

Mr Dowling was due to retire at the end of the academic year. He taught at the Pôle Universitaire Léonard-de-Vinci, a private university located in La Défense business district, 8km northwest of Paris. There are 8,000 students enrolled at the university, which offers a bachelor’s programme in management for foreign students.

The suspected killer enrolled in the management school in September 2016 and was told in August 2017 that he could not continue because he failed the final examination.

Witnesses told Le Parisien newspaper that the two men had a brief conversation on the esplanade in front of the university. The former management student took out a knife and stabbed the teacher 13 times in the throat.

“He tried to flee but two security guards from the university managed to hold him down until police arrived,” a student called Shaima said. She was convinced the attack was premeditated.

Mr Dowling died on the spot, near a well-known statue of a thumb by the sculptor César. The knife was found at the scene.

Pascal Brouaye, the director of the university, told journalists at an impromptu press conference a few metres from the scene that the Pakistani student had been extremely unhappy when he was told that regulations prevented him repeating the year and that he had to leave the university.

The director of the management school, Sebastien Tran, said he knew of no “particular conflict” between Mr Dowling and the former student. “In any case, we had not heard of any threats.”

Mr Brouaye praised Mr Dowling’s “exemplary record” and said “he was always extremely kind and everyone loved him”.

Students from the university who witnessed the killing were taken immediately to a “psychological cell” where Mr Dowling’s fellow professors were also treated for shock. All classes were cancelled for the day.

“Our hearts are broken,” a 28-year-old Ghanian student told Le Parisien. “He was a passionate professor who always made you want to learn more. I cannot understand that anyone could attack him.”

“He was a profoundly kind person. No one understands why he was attacked, though some people are talking about revenge,” a former student told Paris Match.

Another student said she was “deeply shocked and terrified ... You could never imagine this could happen in our school, to one of our teachers.”

The far right-wing leader Marine Le Pen, who has built her career on opposition to Muslims and immigration, tweeted: “It is with horror that we learn of the death of a teacher at Courbevoie, in front of his school, with his throat slit by a former student. A threshold has been crossed in the barbarity that contaminates our country, and which spreads amid total indifference by the government.”

A person using the handle Hyepod tweeted back: “Mr John Dowling didn’t like you and would be sad to see how you are using him to spread your hatred.”