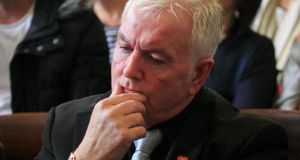 Nearly 25 years ago, 22-year-old Imelda Keenan vanished from Waterford city, where she had been studying. Her brother Gerard Keenan said her disappearance and the lack of any closure in the missing person case had hung like a “dark cloud” over the family for the past 25 years.

Speaking on national Missing Persons Day at a ceremony in King’s Inns, Dublin, Mr Keenan said the tragedy had “taken a toll on the family”, and three relatives, including his mother, had died in the past nine years.

“I know the three of them went to their graves with broken hearts,” he said. “They have campaigned as I have for 25 years,” he said, to find answers in Imelda’s case.

“Unfortunately deep down I have a theory that there are people in Waterford, with vital information who won’t come to our assistance,” he told a ceremony attended by relatives of other missing persons. “We have asked them, we are begging them, come forward now,” he said.

For some families, the long wait for answers on what happened to missing loved ones has been answered in recent times, thanks to advances in DNA forensic testing.

In May 2009, Paul Shine-Dixon (28), originally from Finglas, went missing after visiting a medical centre in Perpignan in south east France, while he was travelling in Europe.

Despite efforts by authorities, and later the family to locate Paul, or his remains, no trace was found. Speaking on Wednesday, his mother Clare Shine said relatives had travelled to France, where they gave DNA samples to French police.

Then on July 6th this year the family received a call from gardaí, informing them French authorities had matched their DNA to remains found in late 2017, which were those of Paul Shine-Dixon.

Ms Shine said the feeling upon hearing this news was hard to explain. “Different feelings range from complete sorrow now that all hope of finding Paul alive was gone, to the happiness that he was finally found, left me completely overwhelmed,” she said.

His remains were returned to Ireland in September, and “this allowed his family and friends to say goodbye,” Ms Shine said.

Minister for Justice Charlie Flanagan said Forensic Science Ireland (FSI) and An Garda Síochána had made several breakthroughs in identifying remains in historic missing person cases. The recent successes “provide tangible hope for many other families,” he said.

Dr Dorothy Ramsbottom of FSI said improvements in the ability to test DNA of remains had led to the identification of three cold cases in the last six months. Forensic analysts were planning to test a further 20 cold cases of unidentified remains, she said.

The process was “slow and tedious,” she said, and only worked if relatives of missing persons had provided DNA samples to the FSI database to be cross- checked against.

Others attending Wednesday’s ceremony included the families of Ciarán Smith and Paul Ormsby, two crewman from the Irish Coast Guard helicopter Rescue 116, which crashed off the coast of Co Mayo. The bodies of the two men have not been recovered.

Addressing the ceremony, Garda Commissioner Drew Harris said it was difficult to truly understand the “cruel and traumatic” experience of those with missing loved ones. An Garda Síochána would continue to improve how they investigated missing person cold cases, including taking lessons from other jurisdictions, he said.