Jackson and Olding not entitled to costs from rape trial 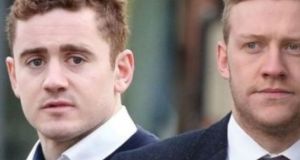 A composite image featuring Paddy Jackson and Stuart Olding, who were acquitted of rape.

The rugby players Paddy Jackson and Stuart Olding have had their applications for costs arising from this year’s high profile rape trial refused.

The two men were acquitted by the jury in March 2018 on counts of rape. Mr Jackson now plays rugby for Perpignan and Mr Olding plays for Brive, in southwest France.

They were acquitted after a nine-week trial in a case involving a nineteen-year-old woman and a party in Mr Jackson’s house following a night out in Belfast in 2016.

Blane McIlroy (26) was cleared of a charge of exposure in the same trial, while Rory Harrison (25) was found not guilty of perverting the course of justice and withholding information.

In her decision on costs, Judge Patricia Smyth was asked to take into account the damage to Mr Jackson’s and Mr Olding’s reputations that had arisen from the trial, the termination of their contracts by the Irish Rugby Football Union, the fact that each of them has been obliged to accept offers of employment overseas, and that they have lost the opportunity to play rugby for Ulster or Ireland.

She did, however, accept that there may be exceptional situations where although a defendant is ineligible for legal aid, his financial situation after acquittal was so irrevocably changed as a consequence of the prosecution that it would be unjust not to take that factor into account.

The court was supplied with details as to the cost of the trial to the two men and how they had paid those costs, however details were not given as to the conditions of their new employment post the trial.

“In those circumstances, there is simply no evidence upon which this court could conclude that the financial circumstances of either Mr Jackson or Mr Olding have been irrevocably changed as a consequence of the prosecution for rape and that this is a relevant factor to take into account in determining the applications,” the judge said.

The court was told that Mr Jackson had paid his costs in part with money he had received from his father’s retirement savings. However the court was not told whether this money had since been repaid or given information about Mr Jackson’s current financial situation.

The judge said the court had the discretion to order the payment of a defendant’s costs, but she was not going to do so in this case.

“This was a highly complex police investigation and the prosecution was warranted albeit the jury did not consider that the charges had been proved beyond reasonable doubt.

“The evidence bore the characteristics of a Rubik cube, capable of bearing myriad conclusions, depending on the jury’s view of the evidence. But those were conclusions for the jury to reach, not for the prosecution.

“Having considered all of the relevant factors, I am satisfied that there is no basis for exercising my discretion in the applicants’ favour. The applications are therefore dismissed.”

The judge addressed arguments based on the decision to prosecute the two men and how the police investigation was conduted. She pointed out that her consideration of these points should not be inferred as undermining the decisions of the jury.

Lawyers for the men said the warning that was given to the jury in the summing up at the trial, that the jury should be careful about relying on the evidence of the complainant, “supported the submission that a proper investigation would have revealed the complainant’s unreliability.”

However Judge Smyth rejected the submission and said it failed to take into account the context in which the warning was given.

“ The jury was expressly told that the purpose of suggesting a number of possible explanations for inconsistencies was so that they could think about it and it was entirely for the jury to decide the significance, if at all, of any inconsistencies in the complainant’s evidence.”

Counsel for the prosecution rejected an argument made on behalf of Mr Olding that more time should have been taken before a decision was made to charge him.

Counsel “rejected the suggestion that a different standard ought to have been applied by the prosecution service in view of Mr Olding’s public profile.” Judge Smyth also rejected any suggestion that there should be a separate set of rules for the rich and famous.

Counsel for Mr Jackson, as part of his submission, also relied on the inappropriate behaviour of some members of the public on social media and on Twitter in particular, the unexpected illness of jurors, and also incidents that occurred which required specific case management in order to ensure a fair trial.

Judge Smyth accepted that the effect of all of those matters had been an increased financial burden on Mr Jackson in particular but added that issues such as juror illness and other unexpected matters often arise in a serious criminal trial.

He submitted that the police ought to have carried out a third interview with the complainant to clarify her evidence in light of answers given by Mr Olding to the police, inconsistencies in her accounts, and the evidence of Dara Florence in particular.

Judge Smyth said the course suggestsed by Mr Olding’s counsel can be problematic in sexual offence cases as drawing a complainant’s attention to inconsistencies in her account as a result of further investigations may give rise to accusations of coaching.

“Taking account of the complexities of Dara Florence’s evidence in particular, I am not satisfied that there was anything within the investigation which gave rise, of itself, to the existence of a serious inherent doubt as to the guilt of the accused.”

She also said that “a consideration of all of the evidence in this case clearly justified the prosecution”.

The judge said that while Mr Olding has answered questions and submitted to forensic examination at first, his later decision not to answer questions, while based on legal advice, was unhelpful and was a relevant consideration in the context of his application for costs.

In the Republic the fact of an acquittal is not a deciding factor on whether a person who had been refused legal aid should have their costs paid by the state, but it is not without weight, according to legal sources.

With the bulk of criminal trials, the defendants come from a socio-economic class whereby they qualify for free legal aid. But defendants who would not normally qualify for legal aid might be granted their costs if the charges they had to face were serious. The matter is at the discretion of the judge and the key question is where the interests of justice lie.

Man charged over drugs and cigarettes worth €900,000 00:20
Girl (12) dies in house fire in Ballymena 00:20
Gardaí seize pistols as part of investigation into Dublin gang 23:25
Pelosi tells Coveney no trade deal with UK if Belfast Agreement jeopardised 22:20
Storm Alex expected to bring wind and showers this weekend 21:46