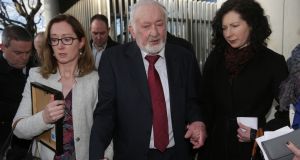 Brother of the late Anthony O’Mahony, Seamus (centre) leaves the Central Criminal Court after Michael Ferris was sentenced to five years for the killing of Anthony O’Mahony (73) in Co Kerry. Photo: Laura Hutton/Collins.

Provocation, a defence which judges have repeatedly said requires significant reform, is used in a quarter of all murder trials.

Ireland is unique among common law countries in allowing a murder accused to obtain a lesser verdict of manslaughter if they can subjectively show they felt provoked into killing.

An analysis of 124 murder cases shows that not only is the defence widely used, it often leads to jury verdicts being overturned on appeal, leading to a retrial or a manslaughter conviction. This is due to what is widely viewed as confusing case law in the area which makes it difficult for judges to correctly address juries about the applicability of the defence.

Now for the first time, legislation is being considered as a means of curtailing its use. Minister for Justice Charlie Flanagan is currently examining the issue with a view to changing it from a subjective test to an objective test.

This would make it a much harder defence to prove and bring Ireland in line with other common law countries.

The move comes following recent high-profile murder cases where provocation was used and after repeated criticism of the defence by the judiciary.

“While there are no immediate proposals for new legislation in this area, the Minister is carefully considering recent jurisprudence and the options for legislation in the period ahead,” a Department of Justice spokesman told The Irish Times.

The provocation defence was highlighted this week by the case of Kerry farmer Michael Ferris who successfully argued he was provoked into killing his neighbour Anthony O’Mahony because of the actions of Mr O’Mahony over a 30-year period.

In October, a jury acquitted Ferris of murder but convicted him of manslaughter for repeatedly driving the forks of his farm teleporter into the victim’s car, causing “catastrophic” injuries. On Monday he was jailed for five years.

The trial heard extensive evidence that Mr O’Mahony was a very difficult person to live near. Afterwards his family said the trial had engaged in the “victim blaming” of the deceased.

Discussion of the defence of provocation on RTÉ’s Prime Time programme on Tuesday night lead to the collapse of an ongoing murder trial where it was being used as a defence.

For critics of the provocation defence, one of the main problems is that in Ireland, unlike the UK, the provocation test is applied subjectively. In other words, the defence must only show that the accused felt they were provoked, not that a reasonable person would have been provoked in the same circumstances.

In recommending reform of the defence, the Law Reform Commission (LRC) detailed a hypothetical situation in which a white supremacist becomes enraged at a black person for speaking to him and kills the victim “in the throes of his bigoted passion”. Legally speaking, the man was provoked and should be convicted of manslaughter rather than murder. “But there is no reason why the law’s compassion should be extended to him, given that his beliefs are not merely unreasonable but are morally repugnant,” the LRC noted.

According to the LRC, the defence offers protection to people with character traits which society should never condone.

“An unfortunate, and perhaps unforeseen, consequence of this approach is that immoral and antisocial traits can be accommodated within the Irish version of the defence,” it wrote in 2009 when calling for the abolition of the subjective test and its replacement with an objective test.

“This is different to a self-defence claim. You’re not saying you were under attack, you’re saying you were provoked into a situation. And that provocation could technically be anything,” one barrister said this week.

The Supreme Court has noted provocation “becomes potentially available in almost any hot-blooded killing”. The defence also puts the burden on the prosecution to prove provocation did not occur.

According to an analysis by The Irish Times, of the 125 murder trials which have taken place in the Central Criminal Court since October 2013, provocation has been used in 31 cases (24.8 per cent).

However it is rarely successful at trial stage. The figures show only four accused succeeded in securing a manslaughter verdict after running the defence.

Instead, its value as a defence comes during the appeal stage.

There have been 13 appeals of murder convictions since October 2013 in which provocation was raised. Seven of these accused were successful in having their convictions quashed and a retrial ordered.

In five out of the seven successful appeals, the appeal court found the trial judge had incorrectly addressed the jury on the issue of provocation. The readiness of the appeal courts to overturn verdicts in provocation cases led to the late Mr Justice Paul Carney to call the defence “a graveyard for judges”.

According to legal sources, the difficulty stems from the MacEoin case of 1978 in which the subjective test of provocation was first defined. Judges often rely heavily on the MacEoin judgment when addressing juries on the issue, but the appeal courts have ruled the judgment is confusing and often incomprehensible to juries.

“So you have a strange situation where the leading case on provocation is seen as deficient by the Court of Appeal in terms of guidance,” one barrister said.

There have been repeated calls from judges, the LRC and legal academics to change provocation from a subjective to an objective test.

The defence of provocation is based in common law, meaning it is not defined in the statute book. Critics argue either the Supreme Court or the Oireachtas should lay out a new definition.

Other suggestions include copying the US system and replacing the binary murder or manslaughter option with “graduated” charges, such as first degree murder or second degree murder, to take account of varying levels of intent.

In 2015, Supreme Court judge Mr Justice Donal O’Donnell said it was “dispiriting” there has been no legislative response to the issue. He said it “may not be sufficiently appreciated just how significant these difficulties are”.