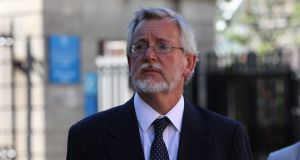 The High Court has issued a summons against the Roscommon solicitor Declan O’Callaghan, seeking judgment against him and his firm, Kilrane O’Callaghan, over €450,000 from a €5.2 million personal injury award to an accident victim.

The victim, Brian Colleran (31) has been confined to a wheelchair since a December 2009 car crash and in 2011 received the compensation award following negotiation.

The Ballaghaderreen-based solicitor, Mr O’Callaghan, represented him, and withheld some €450,000 of the award without Mr Colleran’s agreement.

Repeated requests from the Colleran family for an explanation did not produce information to their satisfaction, although Mr O’Callaghan claims to have provided Law Society auditors and its Regulation of Practice Committee with an explanation.

The summary summons was issued on Thursday by the High Court’s central office in Dublin to the Sligo-based solicitor Damien Tansey, who is acting on behalf of Mr Colleran.

Separately, in the High Court on Friday morning, Mr O’Callaghan will face Law Society efforts to freeze his personal and business bank accounts and effectively shut his law firm, Kilrane O’Callaghan of Ballaghaderreen.

The solicitor has been under Law Society investigation since last April and in July, the president of the High Court ordered that he cease acting as a solicitor. Since last month, the Garda Economic Crime Bureau has also been examining his conduct.

Complaints against Mr O’Callaghan have multiplied in recent weeks and include several new claims from clients alleging he withheld from them significant amounts of money without their permission.

In several instances, the money withheld related to personal injury awards or probate settlements related to the estates of deceased relatives.

Many of the clients claiming to be out of pocket for sums of money typically running to six figures have been trying unsuccessfully to get their money back.

However, the Kilrane O’Callaghan bank account does not have sufficient funds and it is expected that the compensation fund of the Law Society, which has stated that it regards Mr O’Callaghan’s conduct as dishonest, will be asked to reimburse people.

The summons issued yesterday names Mr O’Callaghan and his firm. Since July, it has been run by his daughters, Aoife O’Callaghan and Eimear O’Callaghan, under the supervision of a Law Society appointee, solicitor Brendan Steen.

The intention of the summons is to obtain judgment against Mr O’Callaghan and the firm for the missing €450,000. However, Mr Colleran will also be seeking interest on the withheld €450,000, charged at 8 per cent from 2011, when the compensation award was made, until December 2016, and 2 per cent thereafter until the full amount is repaid.

In the High Court on Friday, the president of the court, Mr Justice Peter Kelly, will hear submissions from the Law Society as to why Mr O’Callaghan’s liquid assets should be frozen and the firm effectively wound up.

It will be suggested that all records in the firm’s Ballaghaderreen office be taken into the possession of the Law Society. Society auditors believe that the firm’s client account has a deficit exceeding €730,000.

Mr O’Callaghan and his wife, Mary Devine O’Callaghan who has been office manager in the firm, are linked to several properties in Ireland and are believed also to have property in Portugal.

It is not known if the Law Society’s application for orders will be contested by Mr O’Callaghan.