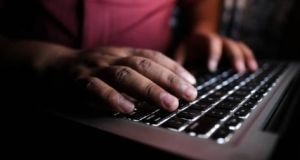 Online trade in illicit goods and services is no longer “merely a modus operandi, but an expanding, highly dynamic and substantial criminal market itself”. File photograph: Getty

Online trading of illicit goods and services “may eclipse” drug and human trafficking and the smuggling of migrants by European organised crime gangs, an assistant Garda commissioner has said.

John O’Driscoll, assistant commissioner of special crime operations, said the online trade in illicit goods and services is no longer “merely a modus operandi, but an expanding, highly dynamic and substantial criminal market itself”.

Mr O’Driscoll was speaking at the 20th annual National Prosecutors’ Conference in Dublin on Saturday.

“The criminal markets involving illicit drugs, trafficking of human beings and migrants smuggling attract the largest numbers of organised crime groups and continue to generate the greatest profits among various criminal markets in the EU,” he said.

“However, emerging crime phenomena such as the online trading of illicit goods and services may eclipse, it is estimated, these markets in size and profit in the future.”

Mr O’Driscoll said intelligence-sharing was an “important part” of how An Garda Síochána operates across borders, but corruption was a “very real challenge”.

“In my time in charge of special operations I even have been shocked in terms of certain jurisdictions where we have to exercise caution, where the corruption is not alone potentially among the law enforcement entities but also in the judiciary,” he said.

The assistant commissioner said while the world’s economy has globalised over the past two decades, “so has its illicit counterpart – the global impact of transnational crime has risen to unprecedented levels”.

“Criminal groups have appropriated new technologies, adapted horizontal network structures that are difficult to trace and stop, and diverted their activities. The result has been an unparalleled scale of international crime.”

Mr O’Driscoll said the Garda National Drugs and Organised Crime Bureau has seized drugs with an estimated street value of €167 million since it was established in 2015, along with more than €10 million in cash, 109 firearms and 3,000 rounds of ammunition.

It intervened in 79 situations where there was a serious threat to life over the same period, he said.

Also speaking at the conference, Director of Public Prosecutions (DPP) Claire Loftus said prosecutors had to embrace the use of electronic presentation of evidence (EPE) in cases.

Ms Loftus said the EPE was most notably used in the “very large banking cases” arising from the collapse of Anglo Irish Bank, and that the approach had assisted juries in understanding the relevance and sequencing of events.

“If we want juries, who we know increasingly use electronic devices rather than paper every day, to engage with and understand criminal cases, we all have to embrace EPE. Over time I would like to see EPE adopted more widely and made available in more and more courtrooms,” she said.

Ms Loftus said the Office of the DPP has received Government support to commence the establishment of a dedicated Sexual Offences Unit next year. The new unit will manage all sexual offences prosecuted in the Central Criminal Court and Dublin Circuit Court, and will make “prosecutorial decisions” on all sexual offences outside of Dublin.