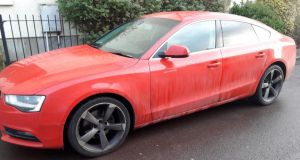 Two vehicles were also confiscated on suspicion they were the proceeds of crime including a 131 Audi A5. Photograph: Garda Press Office

A man believed to be involved in smuggling and trafficking people into the Republic and dealing drugs has been targeted in a series of raids by the Criminal Assets Bureau (Cab).

Detectives believe the suspect, who is from Albania but has been living in Ireland for some time, is part of a wider criminal network of Albanians based mainly in Dublin.

The man targeted into Friday’s raids is in his 40s and is linked to a business in the car industry and another in the restaurant trade, both of which were searched by detectives from Cab on Friday.

The suspect’s home was also searched as well as the offices of an accountant and an estate agent.

No arrests were made, with sources stressing that the operation in Blanchardstown, Dublin, and Bray, Co Wicklow, was focussed on gathering evidence relating to the suspect’s assets and criminal earnings.

Two vehicles were also confiscated on suspicion they were the proceeds of crime; a 131 Audi A5 and a 142 Mercedes C Class.

Gardaí found financial records and a number of electronic devices which were now due to be examined for evidence of assets and criminal conduct.

A bank account with more than €190,000 on deposit has also been frozen by Cab.

Gardaí said the “Cab investigation is focussed on an individual who is a suspected member of an Albanian organised crime gang” involved in the sale and supply drugs and people smuggling and trafficking.

News that Cab is now investigating what they believe is an Albanian crime gang in Dublin involved in people smuggling and trafficking comes weeks after Taoiseach Leo Varadkar said Albanian and Georgian nationals were arriving in Ireland on false documents and applying for international protection.

He suggested this was happening so often it was driving the increase in the number of people from abroad claiming international protection in Ireland.

This week eight Albanians were found on a cargo ship destined for a Waterford port and were sent back to France. It also emerged this week that 23 people were deported from Ireland on a Frontex flight to Albania and Georgia.

However, Garda sources said the investigation into the suspected Albanian gang member that resulted in Friday’s searches by Cab long predated the Taoiseach’s remarks and the recent deportations.

The Irish Times understands the target of Friday’s raid was selected for assets profiling after he involved himself in a Garda investigation into one of his younger associates, who is also from Albanian.

That younger man was found in possession of drugs and when gardaí conducted a follow-up search of his home in west Dublin almost €30,000 in cash was found.

When gardaí confiscated the money because they believed it to be the proceeds of crime, the older man who is now under investigation by Cab claimed the money belonged to him.

However, he was unable to explain its origins and as a result he has been under investigation by Cab for some time.