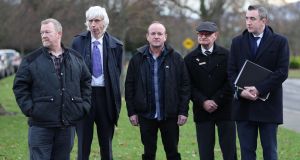 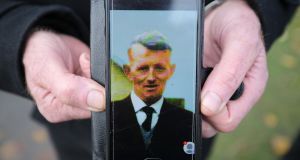 Séamus Ludlow was murdered outside a Dundalk bar in 1976. Photograph: Nick Bradshaw

Garda Commissioner Drew Harris has given commitments to re-examine the case of a man shot dead more than 40 years ago in a suspected loyalist paramilitary attack,the family of the deceased has said.

At Garda headquarters in Dublin’s Phoenix Park on Monday, relatives of Séamus Ludlow said their first meeting with a Garda Commissioner had been positive and opened up new possibilities.

“He agreed that there were a number of investigative opportunities still available to the Ludlow family,” their solicitor Gavin Booth said afterwards.

“He said that he is going to review the situation and meet with us further in the early new year to discuss the case and bringing it forward. He said that he would correspond with the authorities in the North in order to bring forward a timely investigation.”

Mr Ludlow (47), a Co Louth forestry worker, was shot in 1976 after leaving a bar in Dundalk. His body was later found near his home. He had no paramilitary connections.

The State described it as a “callous sectarian murder” and has apologised to the family over the conduct of the Garda investigation, inexplicably abandoned after just three weeks even though members of the Royal Ulster Constabulary (RUC) had identified suspects.

No one was ever charged, and the family says gardaí failed to pursue an important line of inquiry – that Mr Ludlow was a victim of either loyalist or British forces who mistook him for a senior member of the IRA.

Michael Donegan (64), one of four nephews of Mr Ludlow who attended Monday’s meeting, said they were confident of making progress.

“We’ll always get closer [to justice] as time goes forward. How much further must we go? That’s the question. Hopefully not so much further,” he said.

“Nobody would ever have expected what happened to him would ever have crossed his path in his life. The people he met [the night he died] he couldn’t have imagined the same planet that they came from.

“We are determined we will never give up. Never. As long as there’s breaths in our bodies we will fight for his good name.”

The family believes he was assassinated by a loyalist death squad comprising a Red Hand Commando and two members of the Ulster Defence Regiment (UDR). They were angered by rumours that began to circulate after his death that he was killed by the IRA for being an informer.

In a statement ahead of Monday’s meeting, Mr Booth said they would be asking the commissioner to order the arrests of four named suspects.

They are also seeking an independent investigation into the killing, supported by gardaí and their files.

“Like all families bereaved through the conflict in the North, there has been a number of false dawns. There has been negative things that have happened, but more and more I think there is an acceptance that there needs to be something done to deal with the past,” Mr Booth said.

The chief suspects were arrested by the RUC in 1998, and despite some admissions, the family maintains, a decision was taken not to bring prosecutions.

In 2017 the Ludlow family lost a legal action taken in an attempt to force two inquiries to take place, as recommended by a 2006 Oireachtas committee report, itself based on a report compiled by retired High Court judge Henry Barron.

Mr Booth said the family was renewing its call for Minister for Justice Charlie Flanagan to implement the Oireachtas report findings.

In a statement the Garda said Commissioner Harris had a productive and positive meeting. “The family raised a number of queries with the commissioner, and he gave a commitment to respond to those queries and keep in touch with the family through their legal representative.”