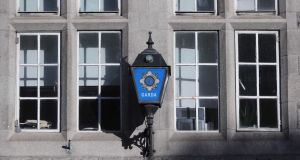 Garda Headquarters confirmed in a reply to queries that a senior officer had been suspended. Photograph: Niall Carson/PA Wire

A senior member of An Garda Síochána has been suspended from duty pending the outcome of investigations into his alleged conduct.

The officer has been under investigation since the summer but had continued to work in his post as the internal inquiry into allegations against him progressed.

It is alleged that crude messages were sent via phone and crude comments, alleged to be sexual in nature, were also made to a female member of the force over a long period of time. The allegations made by the complainant set out an environment that she believed was inappropriate, bullying and intimidatory.

While the inquiry has been ongoing within the Garda there has been contact with, and oversight from, the Garda Síochána Ombudsman Commission (Gsoc).

It is understood several Garda members have been interviewed in an attempt to determine if they witnessed and could corroborate some of the allegations made by the complainant.

An examination of phone records and Garda-issued phone handsets has also been undertaken as part of the investigation.

Garda headquarters confirmed in a reply to queries that a senior officer had been suspended.

“An Garda Síochána can confirm a Garda officer has been suspended from duty today, 6th December 2019. No further information is available,” it said.