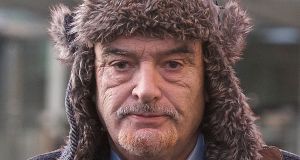 Ian Bailey was arrested in Dublin on Monday afternoon over the 1996 murder of filmmaker Sophie Toscan du Plantier, after a High Court judge endorsed the third warrant seeking his arrest and extradition to France.

Following the endorsement of the European Arrest Warrant by Mr Justice Donald Binchy, Mr Bailey was arrested outside a courtroom at the Criminal Courts of Justice in Dublin.

He was then brought back before the High Court where Detective Sergeant Jim Kirwan, of the Garda Extradition Unit, gave evidence of his arrest.

Mr Bailey was remanded on bail to appear before the court again on January 20th, 2020, for a full hearing in respect of the warrant.

Mr Justice Binchy set a notional hearing date for December 20th next but the court heard Mr Bailey does not need to attend this hearing.

Giving evidence of Mr Bailey’s arrest, Det Sgt Kirwan said he arrested Mr Bailey at 2.34pm on Monday at the Criminal Courts of Justice on Parkgate Street, Dublin 8, that he cautioned him and showed him an original copy of the European Arrest Warrant before giving him a copy of the same warrant in English and French.

He said he explained to Mr Bailey that the warrant was on foot of his conviction in absentia in France, where he was subsequently sentenced to 25 years for the murder of Ms Toscan du Plantier.

Det Sgt Kirwan said when he asked Mr Bailey if he knew what the arrest was about, Mr Bailey replied: “Yes I do. I just want to say I had nothing to do with this crime.”

Mr Bailey was remanded on the same bail terms and conditions previously set down.

‘Easy to keep an eye on’

These included entering his own bond of €15,000 without lodgement on condition that he resides at the address provided to the court; that he surrender his expired passport to An Garda Síochána within seven days; that he undertakes not to apply for a new or duplicate passport or any other travel documents which would allow for him to travel outside the jurisdiction; and that he undertakes not to leave the jurisdiction without the consent of the court.

The terms and conditions also include that he be of good behaviour and that he appears at every court hearing whenever necessary and required.

Det Sgt Kirwan agreed with Ronan Munro SC, for Mr Bailey, that Mr Bailey lives “very visibly in Cork” and is “easy to keep an eye on”.

Mr Munro told the court that endorsing the warrant for Mr Bailey would simply expose the former journalist to another abuse of process.

He recalled the judgment of Mr Justice Tony Hunt in the High Court in July 2017 when the second French extradition request in respect of Mr Bailey was dismissed as an “abuse of process”.

Mr Justice Hunt held that the “unique features” of the case justified “termination” of the proceedings.

Lawyers for the State on Monday said the law had changed since that decision in 2017 and argued that, in the interim period, Mr Bailey had also been convicted of murder at a trial in France in his absence.

Mr Justice Binchy on Monday said he was “satisfied to endorse the warrant” following two significant “changes", namely a change in the law and Mr Bailey’s conviction, in absence, in France.

He said it was “appropriate” to endorse the warrant and to not do so “would be to eliminate all arguments” in the substantive case and such a move would be “premature”.

“The warrant should be endorsed,” he said.

The Supreme Court refused to extradite Mr Bailey in 2012 holding that surrender was prohibited because the alleged offence was committed outside French territory and Irish law does not allow prosecution for the same offence when committed outside its territory by a non-Irish citizen.

Earlier this month, at an earlier hearing, Robert Barron SC, for the State, said that would have been the end of the matter.

However, he said provisions introduced in the Criminal Law (Extraterritorial Jurisdiction) Act 2019 raised two possible interpretations of the Supreme Court’s majority finding on extraterritoriality in 2012.

He said he was putting the “two alternative versions of the Supreme Court judgment up in the air”.

If the High Court held that surrender was still prohibited - under section 44 of the European Arrest Warrant Act 2003 - then it could refuse to endorse the warrant.

The Minister for Justice was obliged to move the application to endorse the warrant, the court was told.

Monday’s endorsement of the warrant marks the third time that French authorities have sought Mr Bailey’s surrender in relation to the death of Ms du Plantier, who was found dead outside her holiday home in Schull in December 1996.

Mr Munro said that in terms of presenting points of objection to Mr Bailey’s extradition, he said Mr Bailey’s legal team needed a better translation of the judgment of the French court annexed to the warrant, saying there are portions of the translation that are “difficult to follow”.

He asked for the court to request that someone from the Minister for Justice’s office or the issuing state translate the judgment into the “mother tongue”.

Mr Justice Binchy told the court he also had “great difficulty reading” it. He said he didn’t wish to put an unnecessary burden on anyone but requested “in short, a better translation” of the judgment. He also added he didn’t wish to cause offence to anyone.

Mr Bailey, with an address at The Prairie, Liscaha, Schull, west Cork, was convicted of the Frenchwoman’s murder in his absence in a Paris court earlier this year.

The three-judge Cour d’Assises in Paris accordingly imposed a 25-year prison sentence on him in his absence.

The 62-year-old Englishman denies any involvement in the mother-of-one’s death.

He did not attend the French court and had no legal representation in the proceedings, which he has described as a “farce”.

Filmmaker Jim Sheridan was present in court for Monday’s hearing.