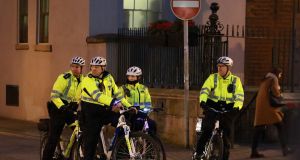 Gardaí may be reluctant to knock on people’s doors because “they know there might be some comeback for those people” if they are seen to co-operate. Photograph Nick Bradshaw

The assistant commissioner for Dublin has denied there are policing “no-go areas” in the capital following the publication of research stating criminal gangs are using anti-social behaviour to attempt to drive gardaí from communities.

According to a major new study of criminal networks in the south inner city, gangs involved in drug dealing are organising confrontations with gardaí “in their cars or on the beat” with the intention of making certain locations no-go areas for policing.

Anti-social behaviour is also used to exercise control over local communities “so as to facilitate criminal activities”, according to the report Building Community Resilience by University of Limerick law lecturer Johnny Connolly.

The study says children as young as 12 are being lured into organised crime by criminals who offer them money, cannabis or the latest runners.

Speaking at the release of the report in Rialto in the south inner city on Thursday , Assistant Commissioner Pat Leahy said he was surprised by little in the report but that he wants to state “loud and clear” that there are no areas in Dublin or Ireland where the gardaí are afraid to police.

“Categorically there are no no-go areas in Ireland. Not only in Dublin. There is no place in Ireland that the police cannot patrol. And they patrol unarmed.”

Mr Leahy said “of course” there are areas where gardaí are at risk of being attacked.

“That’s policing. We have to go up against people that are organised in some ways and that are intent on violent behaviour or anti-social behaviour. But not engaging with them because we might be hurt is not a policy the Garda follow,” Mr Leahy said.

“There are no no-go areas. I need to get that out loud and clear.”

Inner city crime and anti-social behaviour is not getting out of control, Mr Leahy said, “but it is an issue which needs to be tackled for sure”.

The Garda has had much success in tackling high-end organised crime in the last three years, with many serious criminals now in prison or in exile, he said. The challenge now is to tackle the problem at community level and this will be done through the National Framework for Community Policing which is in the pilot stage.

Mr Connolly, who authored the study, said there are not no-go areas for gardaí “in the sense that we’d normally understand it. But there’s a different sort of control where it’s slightly more subtle.”

“Guards will be the first to tell you they can’t do anything without community support. They say it’s very difficult to get into some of these communities because of the fear and intimidation,” Mr Connolly said.

“That doesn’t mean it’s a no-go area for the guards but it’s a very sensitive thing if a guard knocks on your door. They have to think about the implications for people in the area.”

Gardaí interviewed for the report referred to an “unwritten code ie that people involved with the [criminal] network do not interact with An Garda Síochána. ”

This approach influences interactions between other residents and the Garda. Residents fear reprisal for interacting with gardaí even for routine matters, it stated.

“Like, it’s almost something you’d see on TV . . . they did their best to make it a no-go area for policing,” said one garda in the area who was interviewed for the project. “Because Garda cars came in, they were challenged. There might be stuff thrown at the cars, guards on the beat would be challenged, stuff thrown at them. It was dangerous, you know, a dangerous place to be.

“You had to be careful, it would be organised if you were ever going in there because these guys they wanted this place to be their territory, their territory only so they could sell basically drugs and carry out their other criminal activities . . .”

Susan Collins, managing director of the Addiction Response Crumlin (ARC), said he does not believe people pay attention to the Garda anymore. “Even as I was coming down today, there was someone driving in a bus lane. Two young gardaí put out their hands and he just ignored them.”

She said there used to be far more community policing in the area “and a lot more footfall on the streets”.