Headscarves and turbans to be allowed as part of Garda uniform 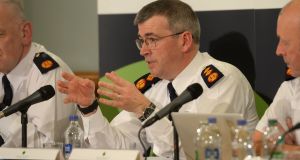 Female Muslim gardaí will be permitted to wear headscarves under new rules due to be announced by Garda Commissioner Drew Harris.

Mr Harris has sanctioned alterations to the garda uniform code to allow the incorporation of certain items of clothing relating to religious groups.

Under the new rules, members of the Sikh religion will be permitted to wear turbans and Muslim women will be allowed wear a partial hijab or headscarf.

The burka and the niqab, which are worn by some Muslim women and cover up much more of the body and face, will continue to be prohibited while on duty.

The newly-sanctioned garments will be supplied by the Garda and will come in the standard blue colour to match the rest of the garda uniform.

The move is aimed at increasing the recruitment of ethnic minorities into the force. According to figures released last year by the Garda Representative Association, just 0.4 per cent of gardaí, or one in 240, come from an ethnic minority compared to six per cent in the UK.

The Irish population is made up of 82.2 per cent “white Irish” with the remainder coming from various ethnic minorities, according to the most recent census.

The association called the lack of diversity “a ticking time bomb” and said more recruitment is required to better reflect the Irish population and to prevent minority communities from becoming marginalised and turning to extremism.

There are about 100 gardaí and reserve gardaí from non-Irish backgrounds. The two non-Irish nationalities with the highest Garda representation are Chinese and Polish. It is not know how many gardaí, if any, are Muslim or Sikh.

Mr Harris’ decision follows the lead of many UK and US police forces in allowing certain head coverings aside from the standard issue hat.

It comes six years after a Sikh man lost a legal case asking that he be allowed wear a turban as a member of the Garda Reserve.

Ravinder Singh Oberoi had completed most of the required training to be a member of the reserve when he was told he would have to wear a full Garda uniform and could not wear a turban.

He challenged this before an Equality Tribunal and the High Court. The High Court ruled the Garda was not guilty of employee discrimination as Garda Reservists are legally volunteers rather than employees.

“In order to encourage candidates from minority communities, An Garda Síochána will consider alterations to the Garda uniform to take account of religious and ethnic requirements subject to operational, and health and safety obligations,” the force said in a statement.

Mr Harris added: “We hope that this will encourage people from minority communities to join An Garda Síochána. We want to demonstrate to them that An Garda Síochána is an inclusive employer that is serious about becoming more diverse.”