Three arrested in Dublin for conspiracy to murder in feud 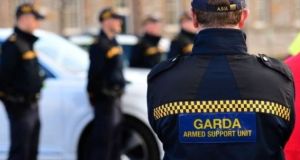 Operation Hybrid has so far carried out 73,000 armed checkpoints across the city in an effort to foil feud-related killings. File photograph: Dara Mac Dónaill/The Irish Times

Three men have been arrested for conspiracy to murder as part of an investigation into feud related organised crime in Dublin.

The men, aged between 24 and 38 were arrested on Wednesday, March 27th in the north inner city and Finglas and are being detained at Dublin Garda stations under Section 50 of the Criminal Justice Act 2007.

It is understood the arrests are connected to the ongoing Kinahan-Hutch feud and that the three men were planning to target a member of the Hutch family.

Last week a member of the Hutch family was jailed for breaking into the Offices of the Revenue Commissioners and assaulting a man who tried to prevent him leaving. Alan Hutch, who is the nephew of Gerry “the Monk” Hutch has 73 previous convictions including assault, robbery, burglary, threats to kill, endangerment, obstruction, and road traffic offences.

In January, Assistant Garda Commissioner Pat Leahy, who is responsible for the Dublin region, said the Hutch-Kinahan feud, which has claimed almost 20 lives over the last three years, is “not going to go away”.

As well as murders, the feud has continued through petrol bomb and arson attacks by allies of both factions in Dublin’s inner city.

“The reality is this has not gone away and it is unlikely to go away,” Mr Leahy. “This is going to be intergenerational.” He said many members of the two sides of the feud are in prison, and their families still live beside each other, meaning lower-level violence is likely to continue.

Operation Hybrid, which was established following the murder of Kinahan associate David Byrne at the Regency Hotel in 2016, has so far carried out 73,000 armed checkpoints across the city in an effort to foil feud-related killings.

Mr Leahy said these checkpoints would be “with us long-term” and are “not going to go away”.

“That’s going to be a factor of policing for a long time,” he said.