Some barristers are being ‘rewarded for failure’ by insurers. says Rossa Fanning 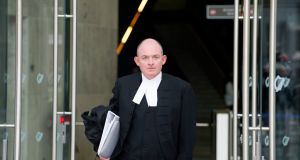 A leading barrister has blamed “economic incentives” for claimants, lawyers and insurance companies, for pushing up costs in negligence and personal injury claims.

Rather the economic incentives for those involved “promote, and do not deter, speculative litigation”.

Mr Fanning was delivering an address, “Does Ireland have a ‘claims culture’ problem”, to a conference organised by the Professional Negligence Lawyers Association, and Holmes O’Malley Sexton solicitors.

Almost all the litigation patterns that make people uncomfortable can be explained by economic incentives, he said. If society wants to change litigation behaviour, then these incentives must be “radically altered”.

It is in the interest of a claimant’s legal advisers to settle a case on the day of the trial, rather than a year earlier, even if the outcome is the same for the client, as this “generates additional fees to be paid for by a defendant.”

A similar point applied to the taking of “wholly unnecessary” applications in court to do with procedures and the discovery of documents.

Those with no income other than social welfare, and living in local authority housing, can run a claim without any real adverse outcome if he or she should lose.

“The pauper has a relatively large amount to gain from bringing a successful claim home, and nothing whatsoever to lose.”

Mr Fanning said the pressure on individual claims managers in insurance companies was to focus on each individual case and the costs it generates.

“I have lost count of how many times in professional negligence actions, I have advised insurance companies that a case is capable of being successfully defended, but … they would rather pay small money to settle a case with little or no merit, rather than risk an award at trial.”

“The reluctance on the part of the insurance companies to defend litigation is one of the great drivers” of professional negligence cases, he said.

“At least one prominent insurance company habitually pays barristers’ brief fees based on a percentage of the award or settlement paid to the plaintiff. In other words, the barrister acting for the insurance company, whose job it is to minimise the award, is rewarded for failure and is paid more if the case settles for €200,000 than €100,000.”

Mr Fanning suggested plaintiffs could be required by law to pay their lawyers, based on their means. A requirement that plaintiffs had to make even a minimal investment in their own cases could alter the economic incentives.

He also noted a fit-for-purpose law that facilitated the prosecution of people who gave deliberately untruthful evidence in support of a civil claim, would deter a certain category of litigant.

He personally would be in favour of a system whereby a claimant’s lawyers might be “on the hazard for the costs” of claims that the courts found had no reasonable basis.