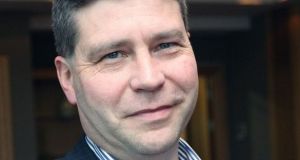 Kevin Lunney, the chief operating officer with Derrylin-based company Quinn Industrial Holdings, was taken from his car by masked men as he arrived home from work a week ago. Photograph: Lorraine Teevan

Police in Co Fermanagh are to question drivers near the scene of the kidnap of businessman Kevin Lunney a week after he was abducted and beaten.

Officers from the Police Service of Northern Ireland (PSNI) are to conduct a road stop in Derrylin on Tuesday evening.

Detective Chief Inspector Julie Mullan said the PSNI was continuing to work closely with colleagues in An Garda Síochána and the “joint investigation is progressing.” She also made a specific appeal to the driver of a silver Ford Focus which was travelling on the Stragowna Road out of Derrylin at approximately 6.40pm on Tuesday 17th September to contact police.

“The driver had to slow down when a black Audi pulled out in front of them on to the road. If you are that driver, please come forward and talk to us,” she said.

This black Audi is believed to have been used to stop Mr Lunney reverse away when he was prevented entering his driveway by a BMW car a week ago. It has not yet been traced.

Mr Lunney, the chief operating officer with Derrylin-based company Quinn Industrial Holdings (QIH), was taken from his car by masked men as he arrived home from work a week ago.

He was taken across the Border where he was brutally beaten before being dumped by the side of the road in Cornafean, Co Cavan, more than two hours later.

Detective Chief Inspector Mullan said it was “an abhorrent attack on a local hardworking businessman” which had left him with “ brutal, life changing injuries” across his face and body.

“The savages who carried out this attack have no place in our society and we are doing everything in our power to bring them to justice.

“This evening, my officers will be out speaking to the public in the local community and we would ask if anyone remembers anything suspicious, no matter how small, to please let us know. It could be relevant to the investigation.”

She also reissued an appeal for anyone who noticed any suspicious activity or saw a silver BMW or a black saloon Audi being driven in the Derrylin, Fermanagh/Swanlinbar, Cavan areas last Tuesday to contact the PSNI or An Garda Síochána.