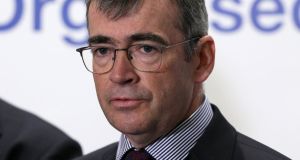 Garda Commissioner Drew Harris revealed on Wednesday which stations would be the divisional headquarters after 28 divisions are amalgamated to create 19. Photograph: Brian Lawless/PA Wire

News that seven Garda stations around the Republic are losing their status as divisional headquarters and an eighth is undergoing a partial downgrade has been met with surprise and opposition in political and policing circles.

Garda Commissioner Drew Harris revealed on Wednesday which stations would be the divisional headquarters in each division after 28 divisions are amalgamated to create 19 divisions under his reorganisation of the force.

The stations that had been divisional headquarters but will no longer enjoy that status are: Roscommon, Sligo and Monaghan towns as well as Navan, Co Meath; Naas, Co Kildare; Bray, Co Wicklow; and Thurles, Co Tipperary.

However, Kilkenny will be the headquarters for the Garda’s Eastern Region and so will retain a chief superintendent.

Likewise, though Monaghan town loses its status as divisional headquarters, the chief superintendent for the North Western Region will be based there. That represents an effort to retain continuity in the Border region during the Brexit process, which will be challenging for gardaí.

Some Garda sources said now it was clear that eight stations that had been divisional headquarters for years would not retain that status, local and political campaigns against the perceived “downgrading” would grow.

“What you will see right across the middle of the country is that there will be very few Garda superintendents, and I don’t think that is a good measure. I said to the Minister and I said to the Garda Commissioner that this is not acceptable. What is the point of developing a plan like Project Ireland that talked about focusing on the middle of Ireland and developing a hub there if this is the case.”

“It is extremely gut-wrenching for so many people in the Navan area and wider Meath area too. We have been made effectively second-class citizens in this area. It is not about just bricks and mortar, our division is 162km in width. Westmeath has half the population of Meath and they have per head of population nearly twice the gardaí.

“This just copperfastens an already unequal system. I raised this with the chief superintendent at a policing meeting on Monday. He is now charged with implementing the commissioner’s wishes. It is not good enough and there needs to be a rethink of this plan.”

“Yet again, the Government’s contempt for rural Ireland and their ambivalence to the needs of the regions has manifested itself with the flagrant and ill-informed downgrading of Garda infrastructure and resources in the northwest.

“With increased dissident activity in the Border region as clearly exemplified with the recent attack on Mr Lunney, not to mention the post-Brexit demands on the Border with or without a deal, it defies all logic to downgrade the communities of Sligo and the wider northwest region in this way. I cautioned against such a retrograde step earlier this year. Fine Gael’s contempt for the regions knows no bounds.”