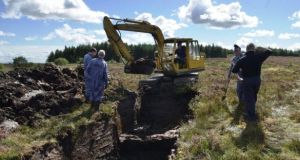 File image of a dig being carried out at the Bragan bog in Co Monaghan for the remains of Columba McVeigh. File photograph: Brenda Fitzsimons

The head of the Catholic Church in Ireland has made a fresh appeal for information to find three men killed and secretly buried by the IRA.

Archbishop Eamon Martin spoke out after the latest search to find Columba McVeigh ended without success.

He described the disappointment felt by the teenager’s family as “heart-rending” and urged anyone with information about where he or former monk Joe Lynskey or soldier Robert Nairac are buried to come forward.

The three were among 16 people who were murdered and secretly buried during the course of Northern Ireland’s troubled past and have become known as the Disappeared.

The IRA is deemed responsible for most of the murders, while the INLA was behind one of the disappearances.

Mr McVeigh, from Donaghmore, Co Tyrone, was one of the first to be murdered and secretly buried in 1975.

The latest search for his remains at the Bragan bog, Co Monaghan, by the Independent Commission for the Location of Victims’ Remains (ICLVR) has ended without success.

Capt Nairac is believed to have been abducted from a bar in south Armagh in May 1977. Unsuccessful searches have taken place for his remains at Ravensdale forest, Co Louth.

Mr Lynskey went missing from his west Belfast home in May 1972. Searches have taken place for his remains in Co Meath, but ended without success.

The archbishop urged anyone who is able to help end the heartache of each of the men’s families to come forward.

“I once more appeal to the conscience of anyone who has information that might help find Columba, Joe Lynskey or Robert Nairac, to come forward to the Independent Commission for the Location of Victims’ Remains, so that the remaining families can experience the consolation of being able to offer their loved ones a Christian burial,” he said.

“The slightest clues could lead to them. Please help end their heartache.

“I appeal also to those carrying long-held secrets, from what were awful, terrible times, to share what information they have – they may hold the key to unlocking the uncertainty and grief of those families who are still desperately waiting and hoping.

“I ask everyone to keep the families of the Disappeared in their prayers during these difficult days.”

Columba’s sister Dympna Kerr said all her family want is to be able to bury him beside his parents so they can rest in peace.

“It’s impossible to describe the continuing pain and torment of yet another year passing and another search ending with Columba still lying in some desolate unmarked hole in the ground where he was left by his murderers,” she said.

“Why is that too much to ask?

“What have we done to deserve this inhuman treatment?

“What cause is served by denying an ordinary Catholic family a funeral Mass for over 40 years?

“Someone knows where he is. If he was moved from one place to another someone knows about that.

“If they have any decency or humanity about them they will end this torture now.”

Columba’s brother Oliver said the family are both devastated and angry that he has not been found.

“We are angry that people who have information are watching us suffer and are doing nothing,” he said.

“They keep saying that they have told the commission where he is.

“They’ve searched over 21 acres for Columba’s remains and the one thing we can say with complete certainty is that he is not where they are telling us he is, so we then have to look at the possibility: are they telling us the truth?

“I don’t believe this is the end, in fact it will just strengthen our resolve to locate Columba’s body by whatever means possible.”

Ms Kerr thanked all those who have supported the family, and the ICLVR for their work.

ICLVR investigators believe if the teenager had been buried in the area they were searching they would have found him.

Geoff Knupfer, lead forensic scientist and investigator with the ICLVR, said: “Bragan bog covers a huge area. It may be that Columba’s remains are indeed on the bog but clearly not where we have been told to look.

“If he was moved then we need someone who has knowledge of that to come forward.

“I will emphasise again that all information that comes to us is treated in the strictest confidence and there are cast-iron legal protections in place.”

Earlier this year Crimestoppers announced that an anonymous donor had put up a reward of £47,539 (about €53,764) for information that results in the recovery of the remains of the three outstanding Disappeared victims.

Anyone with information should contact Crimestoppers, on 0800-555111 or using the untraceable anonymous online form at www.crimestoppers-uk.org. – PA