Institute director Vallely, a friend of many of Ireland's great and good, was accused in court of being a 'slum landlord' due to state of student accommodation 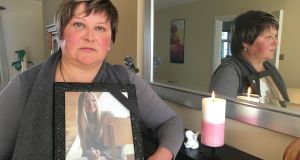 The last time Sanita Zarina saw her daughter, she was dead.

But even in death, the only part of 22-year-old Dace her mother was advised to inspect was her feet, sticking out from underneath the cover that shielded the rest of her body from view.

On the upper part of one of Dace’s feet was a tattoo, a picture of a dandelion seed head. A few of the tiny individual seeds were floating off into the sky, a representation of the lightness of carefree youth.

For Sanita today, the tattoo says something extra. “It means ‘I’m feeling bad at this moment but I believe in my future’,” she explains.

She is sitting in her home in Longford recalling the fire that, on January 31st, 2014, killed Dace and Sara Gibadlo (19) from Oranmore in Galway.

Both were students at the Galway Mayo Institute of Technology (GMIT) and were on work placement with the Irish college in Leuven (or Louvain) in Belgium, known formally as the Leuven Institute for Ireland in Europe.

It is run by Malachy Vallely, a friend and associate of many of Ireland and Belgium’s great and good but whose stewardship of the institute is now under scrutiny as never before.

On Tuesday, a three-judge court in Leuven sentenced Vallely to one year’s imprisonment, suspended, and fined him €6,000 for multiple failings under Belgium’s fire regulations leading, through negligence, to the students’ deaths, while not intending them to die. The institute was fined €60,000.

When contacted this week, neither Vallely nor the institute were willing to discuss the case.

Vallely was not in court for sentencing and, at an earlier hearing, was described as a “slum landlord” who used the student accommodation as a “cash cow” to enrich himself.

What emerges from an examination of Vallely and his running of the institute is that, although in receipt for a time of very significant sums of Irish taxpayers’ money, and also a regular throughput of students, Vallely was in effect a one-man operation.

Dace Zarina was born Limbazi, a small town in northern Latvia some 17km inland from the Baltic Sea. She lived there till she was 16, with her brother Ugis (now aged 27), and Sanita, and Sanita’s then husband.

In about 2009, Sanita came to Ireland to work in a mushroom farm in Cavan hoping, ultimately, to save enough money to study psychology.

As a young girl, Dace (her name is pronounced “dat-say”) liked reading books and dancing and her friends. She had close friends, real pals to last a lifetime, maybe just two or three, says Santia.

She was known at her school in Latvia for being “a very smiley girl”, her mother recalls.

Eventually, Dace enrolled at GMIT to study catering and hotel management; as part of the course, there is a requirement to participate in work placement abroad.

It was this that brought Dace, and several other GMIT students, to Leuven, where accommodation while on work placement at the institute was provided in a nearby block, owned by Malachy Vallely. He collected a fee from the institute.

Another former mature student, Niall Murphy, now culinary director of the cookery school at Donnybrook Fair, recalls being a mature student in Leuven about eight or nine years ago and being appalled at the accommodation offered by Vallely.

The seven-room block was known to students as “the squat”, he said this week.

“When I got there, I went into this very dilapidated building in an appalling and filthy condition,” he recalled this week. “The staircase was so rickety, you could only have one person on it at a time.”

He said showers in the block were plastic inserts, rather than tiled alcoves, and were “covered in mould and fungus”. Some doors did not close properly and there were fire extinguishers whose functionality he doubted.

The place was, he says, “an accident waiting to happen” and his complaints, in Leuven and on return to Ireland, did not result in a change.

“Despite numerous complaints to the institute and to the various training centres and colleges here in Ireland who placed students in Leuven, none were prepared to investigate these complaints or indeed take the necessary actions to ensure the safety of their students during placement,” Murphy told The Irish Times.

“I hope now that GMIT and all the colleges and training institutes, including the training centre who placed me in this substandard and dangerous accommodation, will now acknowledge their part in this accident.”

The Irish College in Leuven has a long and distinguished history as a seat of Irish Catholic scholarship on mainland Europe.

A Franciscan institution, it traces its origins to the Flight of the Earls in 1607 and would rank itself as an outpost of Irish learning and culture alongside that of similar colleges in Rome and Paris.

In 1983, a new chapter beckoned when the Franciscans gave the college for a peppercorn rent to the Leuven Institute for Ireland in Europe, essentially the brainchild of Malachy Vallely.

Vallely is a former county hurler for Antrim GAA whose singleminded vision transformed the college, now the institute, into a significant cultural and social outpost for Ireland and, crucially, eventually persuaded the Irish government, and the government of Northern Ireland, to invest €11 million and €3 million, respectively, into restoring the place.

Other grants from the Irish government over the years varied from between €25,000 a year to just a few thousand a year and were related mainly to running costs. These grants ended in 2014, by coincidence or not, the year of the fire in which the two students died.

Vallely has lived in Belgium for decades and has business interests there, including a pub, the Thomas Stapleton, which is near the Institute. At weekends, if food is not available at the Institute, students are encouraged to eat there.

Vallely is also keen on traditional music and has played at the pub. At the institute’s sports grounds, he hosted many GAA events.

The institute sees itself playing a role in the Northern Ireland peace process by, essentially, enabling contact and encouraging, with the help of guided tours of major first World War sites in West Flanders, including the Island of Ireland Peace Park, the In Flanders Fields Museum and the Menin Gate, a wider appreciation of shared aspects of Ireland’s history.

Not surprisingly, therefore, the institute is well known to many Irish and British politicians, government officials and diplomats and others who have taken an interest it its work.

Who runs the institute is something of a secret. Its website, under the heading “governance”, says there is a board “which is made up of representatives from the public sector, private sector and higher education sector drawn from Ireland, Northern Ireland and Belgium”.

However, the website doesn’t disclose their identity and this week, neither would the Institute itself. The person who answered emails and telephone calls this week said Vallely was on holiday and they knew nothing.

“To be honest, I’m very unaware of this myself,” said the man who answered the phone. “I deal with the CEO [Vallely]. This is something I can’t answer for you. There is a board but I don’t answer to it. I can’t help you. I can’t comment.”

Current and former members of the board include Louis Roppe, a Belgian lawyer, close friend of Vallely and former mayor of a nearby town; Sir Gerry Loughran, a former secretary to the Northern Ireland Executive; Maurice Healy of the Healy Group; and Robert Watt, secretary-general of the Department of Public Expenditure and Reform, who left the board in May 2017, weeks before the first court hearing against Vallely and the institute.

The institute has a fundraising trust, the Leuven Development Trust, the directors of which include Brian Nason, a former diplomat, husband of Ireland’s incoming ambassador to the United Nations, Geraldine Nason, and a man who shares Vallely’s passion for Irish music; and Michael Flynn of Trinity College, Dublin.

According to some familiar with its functions, the institute board, which meets three or four times a year, rotating between Leuven, Dublin and Belfast, does not function adequately and was described by one observer as “a board that is self-renewing but doesn’t renew itself”.

One source said the problem with Vallely was “a classic – the founder of something never moving off the pitch”.

Said another source: “It was never clear to me where Malachy Vallely’s interests ended and the institute’s began.”

In weekly Skype chats with her mother, Dace Zarina said she enjoyed her work at the institute, serving meals to the many dignitaries she said came there to dine or attend functions.

But few of them, or perhaps even the board itself, knew of, or resolved, the evident conflict of interest in Vallely’s commanding role in the institute and the placing of students in property he owned, and from which he collected rent.

In the event, the court in Leuven handed down the maximum sentence requested by the prosecution.

Dace and Sara died from smoke inhalation, huddled in a wardrobe, as fire swept through the accommodation block.

At the trial, lawyers for Vallely and the Institute said they were themselves partly responsible for their deaths, saying they drank too much and were consequently unable to flee.

No evidence was produced to support the allegations and the judges did not believe the claim.

Rather, the prosecution produced evidence of what the families’ solicitor Colin Lynch described as “hundreds” of breaches, by Vallely, of fire and other safety regulations.

Vallely has his defenders.

The fire and aftermath was a case of “taking things for granted and not getting it right. He’ll suffer grievously from it. He would not be callous deep down.”

Dace was buried in Latvia. Vallely attended the funeral.

Like Niall Murphy, she also feels that those in Ireland who sent students to Leuven had a duty of care and should have made sure accommodation was up to standard.

“I hope my story can change something for next students [and] for their parents,” she says. “That they understand, maybe how to look, how to check, where their children are going. That’s really important for me.”