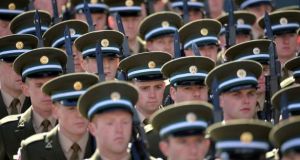 The strength of the Defence Forces has fallen below 9,000 for the first time. File photograph: Alan Betson

Concerns are growing about the ability of the Defence Forces to play a full part in the Republic’s national security as its strength has fallen below 9,000 for the first time.

It is the first time since the early 1970s, when Defence Forces were increased in response to The Troubles, that the strength has gone below what is regarded by many as a critical milestone.

Senior officers are now worried the Army, Navy and Air Corps are locked into a negative spiral of experienced personnel retiring early at a time when capacity to recruit and train large numbers of personnel diminishes.

The Army accounts for the vast majority of the 8,990-strong Defence Forces; numbering 7,215 personnel.

The impact of personnel shortages in the Air Corps was already highlighted earlier in the year when Coast Guard Rescue 116 crashed off the Co Mayo coast and its crew killed.

The Air Corps was unable to provide top cover to another rescue helicopter taking an injured fisherman off a trawler about 250km off the west coast.

Instead R116 was sent and it crashed with the loss of all four crew on board.

An Air Corps helicopter and crew were simply not available to take on the mission. Due to staff shortages the military airport at Baldonnel, Co Dublin, effectively operates from Monday to Friday, 8am to 6pm.

And while worsening terror attacks in European cities two years ago prompted a Government promise to double the Army Ranger Wing, no progress has been made since then.

Senior officers say the Defence Forces should be increasing its capability in gathering intelligence about threats to State security, including terrorism and large-scale cyber attacks.

They also believed a joint Garda-Defence Forces strike team was needed to respond to a terror attack as it was unfolding, just as a military-police team had shot dead three Islamic State terrorists during the attack in London in June.

“Instead, we’re putting all our effort into basic recruitment for run of the mill posts,” said one officer.

The Representative Association of Commissioned Officers (RACO) said on average members can expect eight different postings in a five-year period.

Deputy general secretary Lt Col Derek Priestley said his organisation was confident the Defence Forces would be able to respond to any international terrorist attack in the Republic.

However, he believed if such an attack was more complex, perhaps involving a number of locations such as the recent attacks in Spain, the Defence Forces would be challenged.

Minister for State with responsibility for Defence Paul Kehoe TD said the capacity of the Defence Forces was being maintained “to the greatest extent possible” to respond to any request to aid the civil power; such as assisting the Garda deal with a terrorist attack.

Replying to queries for The Irish Times he also said plans to expand the ranger wing were ongoing.

Lt Col Priestley questioned the Department of Defence’s assertion that 600 extra personnel would be recruited by the end of the year to augment the 385 personnel in training.

He said the Defence Forces needed to assign staff to train recruits and others to provide their meals and other services when they lived-in at barracks as part of their training.

“There simply is not the capacity to do that,” he said.

“An Air Corps cadetship that had been taking two or 2½ years is now being pushed out to 3½ years.

“Why is that? They only have a handful of planes they can fly on because they don’t have the technicians needed to maintain the other aircraft.”

Because the skills required in the military “can’t be bought off the shelf” it was crucial new ways were devised to retain highly skilled personnel with 10 to 15 years service or more.

He said many skilled personnel in the Defence Forces which an engineering background and who were skilled in IT were highly sought after in the private sector.

“But it’s the full range of personnel (retiring early); pilots, air traffic controllers, marine engineers and doctors. A lot of personnel are going MBAs looking towards getting out.”