Harris believes parts of Charleton report written directly to him 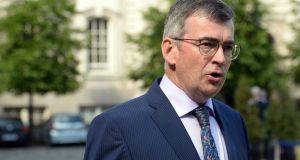 Garda Commissioner Drew Harris has said he believes certain aspects of the Charleton report were drafted specifically for his attention.

Speaking to the media following a public meeting of Co Longford’s Joint Policing Committee on the challenges posed by rural crime, Mr Harris vowed to restore confidence in an organisation which has come under intense public scrutiny in the wake of recent controversies.

Mr Harris also told of how he believed certain aspects of Mr Justice Charleton’s report had been written to him.

“I don’t want to refer specifically to the actions I might have to take in terms of the Charleton Report, but I would say the last few pages of the report read as if they were written directly to me and were a clear call for action and I will not be found wanting in terms of that report,” he said.

Mr Harris would not be drawn on his decision to allow Garda superintendent Dave Taylor retire from the force on a full pension rather than face the rigours of a disciplinary investigation in the wake of the tribunal’s findings.

Supt Taylor had come in for heavy criticism over his role in a campaign to smear whistleblower and now fellow retired officer Sgt Maurice McCabe.

When pressed over the issue, Mr Harris said it would be wrong “to talk about an individual human resource matter”.

The former PSNI Deputy Chief Constable also revealed that inevitable “operational outcomes” would arise from a review he has ordered into the force’s handling of rapist Eoin Berkeley.

It emerged last week that Berkeley should have been in custody for breaching bail conditions at the time he assaulted a teenage girl.

Mr Harris stopped short of confirming whether the contents of that review would be made public, but hinted that changes in bail laws might have to be considered as part of its overall findings.

“There will be operational outcomes from that and in some ways what we will do with that is we will report to the Policing Authority and to the Justice Minister on what we have found from the examination of that case,” he said.

“At the same time I don’t really want to inform criminals or those on bail about what tactics we are going to adopt.

“It’s an approach to see how do we manage and police bail provisions and how we can we do that better going into the future.

“Let’s do the review first. Obviously its a very concerning case and that is why we undertook a review and why I have asked for that to be done quickly.

“Part of that will be what is the legislative framework we are working within and do we need more powers and alternative tactics in terms of bail. Tactics and disposals which are available in other jurisdictions, we might need to consider those and those will require changing the law.”