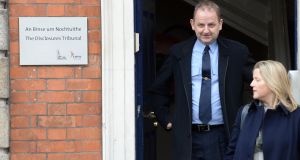 Maurice McCabe spent the later years of his career in the eye of a political, legal and media storm.

He joined An Garda Síochána in August 1985 and in 2004 moved to Bailieboro, Co Cavan, to take on the role of sergeant in charge.

In 2008, he moved to Mullingar, where he was stationed up until recently.

From 2007, he was involved in complaints to Garda management about matters to do with policing standards, at first in Bailieboro, and later more broadly.

By 2014, matters he had raised about the penalty points system were being investigated by the Dáil Public Accounts Committee.

The then Garda commissioner, Martin Callinan, was strongly against a serving sergeant appearing before the committee.

During private conversations with the then chair of the committee, John McGuinness, the Comptroller and Auditor General, Seamus McCarthy, and Fine Gael TD John Deasy, Callinan warned that McCabe was not to be trusted.

He told McCarthy that McCabe had been accused of sex abuse and he told McGuinness that McCabe was a “kiddie fiddler”.

Callinan’s criticism of whistleblowers during his appearance before the committee – he described McCabe’s action as “disgusting” – contributed to his subsequent resignation and his replacement by Nóirín O’Sullivan.

In February 2015, the government established the O’Higgins commission to investigate McCabe’s complaints about policing matters as well as complaints he had made against certain senior officers.

Leaks to the media about what had allegedly happened at the private hearings of the commission led to calls for the resignation of O’Sullivan.

The controversy was a major contributor to her eventual resignation in September 2017.

In 2006, McCabe had been accused of historical sex abuse by the daughter of a Garda colleague.

In 2007, the disputed allegation was comprehensively dismissed by the Director of Public Prosecutions, which found that even if it was true, it wouldn’t be an assault.

In 2013, the woman who had made the dismissed accusation, Ms D, now a young adult, attended counselling.

When drafting her report on the matter, the counsellor, Laura Brophy, made a “cut and paste error” which led to the dismissed 2006 allegation being misdescribed as an allegation of digital rape, something no-one had ever alleged.

In December 2015, the child and family agency, Tusla, contacted McCabe about the false claim and said it wanted to assess whether he was a threat to children. The agency later apologised for this.

In September 2016, McCabe was told by Supt Dave Taylor, a former head of the Garda press office, that there had been a secret campaign in 2013/2014 to destroy his character, and that this had been directed by Callinan, and that O’Sulivan, Callinan’s then deputy, had known about it.

In February 2017, the Oireachtas established the Charleton tribunal after it was revealed that Tusla had produced a false claim of child sex abuse against McCabe and amid concerns this might be linked to his whistleblower activities.

In his report earlier this month, Mr Justice Peter Charleton said that “despite its bizarre nature”, the Tusla allegation was “a genuine mistake”.

He also found that Callinan and Taylor had been involved in running a “campaign of calumny” against McCabe but O’Sullivan had no part in it.

Taylor had made his allegations against O’Sullivan because he was motivated by bitterness.

The judge said the leaks to the media about what had allegedly happened at the O’Higgins commission had been misleading.

Mr Justice Charleton said McCabe’s whistleblowing “generated considerable animosity towards him” within the police force, even though Sgt McCabe, in doing what he did, “was not only right but was courageously setting about serving the people of Ireland”.

All through his ordeal, the judge said of McCabe, “nasty gossip about him was rampant”.