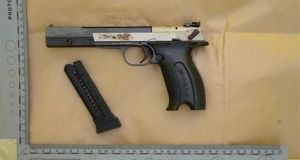 The pistol found in Derry, which was used in the killing of Lyra McKee 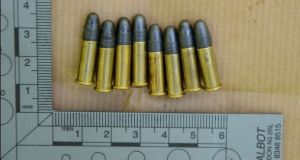 Bullets found with the gun in Derry. Photograph: PSNI 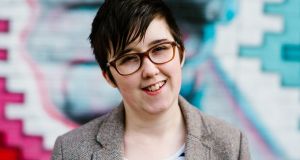 The handgun recovered by police in Derry last weekend was the weapon used to kill journalist and writer Lyra McKee, the PSNI confirmed on Thursday.

Ms McKee was shot dead in April last year as she was observing rioting in the Creggan area of Derry.

Last weekend police recovered a Hammerli X-Esse pistol following searches in the Ballymagroarty area of Derry. Bullets also were recovered with the gun.

On Thursday evening detectives from the PSNI’s major investigation team confirmed this was the weapon used to kill the 29-year-old journalist.

Det Supt Jason Murphy, the officer leading the investigation, said since April 18th last year the PSNI had been “collectively focused on seeking to bring to justice those who were involved” in Ms McKee’s killing.

“That collective effort has never been simply directed towards the person who pulled the trigger. I am as clear today as I have ever been that the bringing of that gun onto the streets involved a number of senior figures in the New IRA,” he added.

“Today’s confirmation is a significant step forward and opens up a new avenue of investigation for my team. We will be relentless in pursuing opportunities to bring to justice every person who was involved in the chain of events that led to the gunman indiscriminately firing four shots,” said Det Supt Murphy.

Det Supt Murphy said that on Wednesday night he had the “unenviable task” of telling Ms McKee’s family and her partner Sara Canning about the weapon used to kill her.

“Understandably they are relieved that no other family will ever have to face the devastation arising from the use of that gun, that they have been forced to face for the past 15 months,” he said.

“They have appealed for the local community to continue to help my investigation,” he added.

Det Supt Murphy said very detailed forensic examination of the gun, ammunition and the plastic bags in which they were wrapped was continuing.

“The gun jammed as the gunman fired and I know from the video footage that the gunman tried several times to eject the jammed rounds,” he explained.

He added, “For that reason, I have asked scientists to extend their forensic examination beyond the outside of the gun and forensically examine the inside mechanisms of it, to establish whether the gunman, in his haste to clear the blockage, may have left forensic traces inside the gun.

He said the forensic work would take “some considerable time”.

Det Supt Murphy said the shots fired at police lines during the rioting, one of which killed Ms McKee, placed many officers at significant risk of death or serious injury.

“The presence of bystanders like Lyra, who were watching the unfolding events, was an inconvenience to the terrorists but the gunman clearly placed no importance on that. Any reasonable assessment must be that for the New IRA, the community were, and continue to be, expendable collateral damage,” he said.

“The disregard shown by the New IRA is staggering but completely unsurprising. They continue to put their own agenda above the rights of local communities to live in peace,” he said.

The officer added that the investigation also extends to the disappearance of the weapon after it was fired. “Somebody was able to transport this gun and its ammunition from Creggan to Ballymagroarty and hide them in a field, within 250 yards of local housing. This placed other members of the public at further considerable risk,” said Det Supt Murphy.