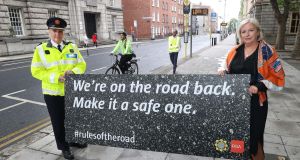 Assistant Garda Commissioner Paula Hilman (left) with Liz O’Donnell, chairwoman of the Road Safety Authority, pictured at the launch of a new road safety campaign urging road users to be extra cautious as the roads get busier during the easing of the Covid-19 lockdown. Photograph: Robbie Reynolds

The Republic’s roads were now a changed environment and drivers were in for the biggest “wake-up call” of any road users, the chair of the Road Safety Authority Liz O’Donnell has said.

Because the number of people walking and cycling had increased exponentially during the Covid-19 lockdown and more road space had been given over to these modes of transport, drivers must now get used to what Ms O’Donnell believed would be a permanent change.

“Now that travel restrictions have been lifted, we’re getting back into our cars and entering the road space again and we’re sharing it with thousands more cyclists and pedestrians, people out running and exercising,” she said.

“That’s not going to change. People have adapted to a new way of life, a more healthy way of living and a more sustainable way. Motorists in particular are going to have the biggest change in their awareness… they have the biggest wake-up call.”

Drivers would need to go more slowly and be much more mindful of the changed environment. There was now greater priority given to cyclists and pedestrians on many roads, with councils across the country set to make further changes in that regard.

People were “driving too quickly” and the number of fatalities on the roads so far this year, at 64, was the same as this time last year despite three months of lockdown, which was “worrying”.

Ms O’Donnell was speaking at a joint RSA and Garda event in Dublin aimed at urging all road users to exercise caution as the Republic began significantly re-opening.

Assistant Commissioner Paula Hilman, head of Garda Roads Policing and Community Engagement, said while gardaí no longer had the power to enforce the “20km from home” rule, a high visibility Garda presence would still be in place across the road network.

“We’ll still be out there; engaging, explaining, educating road users. There’s no enforcement available to us anymore but I think it’s about social responsibility,” she said of the need for people to remain in their home county and within 20km of their homes, unless they have a valid reason, in accordance with public health guidelines.

While the “vast majority” of road users had behaved “responsibly” during the lockdown, some drivers had seen the quieter and more open roads as a speeding opportunity.

It was crucial all road users were more alert now that many more people were moving around the Republic as restrictions were eased during phase two.

“We are seeing increased traffic on our roads; increased vehicles and a lot more people involved in action travel like cycling and pedestrians walking,” said Ms Hilman, who joined the Garda last month from the PSNI.

“In the cities, the landscape is changing and may continue to change with the allocation of road space to cycle lanes and pedestrian pathways. People needed to be aware where the changes are.”

Ms Hilman added the Garda was now “reaching out” to people across the country and urging them to be “considerate and careful” when back out on the roads. Drivers in cities needed to be aware of how the layout of roads had changed in some places during the lockdown period and they also needed to be aware of the high number of more vulnerable road users, including cyclists, pedestrians and motorcyclists.

Speeding contributed to more than one third of our fatal traffic collisions and drivers and other road users should be “considerate” and not use electronic devises, namely mobile phones.

Ms Hilman added motorists who were resuming driving to and from their place of work or returning to make more regular journeys by car needed to check their vehicles to ensure they were in working order and should make shorter journeys to get used to driving again before making longer journeys.

Coronavirus: Five deaths and 248 more cases reported 17:37
More than 100 people gather in Co Donegal for anti-Covid-19 restrictions rally 16:42
Cork hunger strike exhibition ‘to educate youth about Irish freedom’ 16:16
Man with electric scooter who died in Meath was due to get married in the coming weeks 14:40
Two men arrested following Garda chase in Balbriggan 13:47