Attempt at ‘informal resolution’ of crisis has reached an impasse 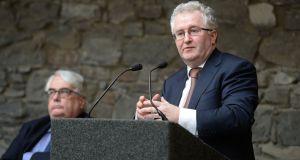 Chief Justice Frank Clarke (left) and Supreme Court judge Séamus Woulfe. It now seems clear that the Chief Justice and the other members of the Supreme Court are of the view that the heart of the crisis now facing the judiciary is the poor judgement of Mr Justice Woulfe. Photograph: Alan Betson

The time may be coming for politicians to get involved in the removal of Mr Justice Séamus Woulfe from the Supreme Court.

After the publication on Monday of the extraordinary correspondence between the judge and the Chief Justice, Frank Clarke, it is clear the attempt at an “informal resolution” of the crisis has reached an impasse.

The Chief Justice has taken the extraordinary step of asking the latest appointee to his court to resign and then published the fact, and the appointee has responded by saying he does not intend to resign.

Furthermore, it now seems clear that the Chief Justice and the other members of the Supreme Court are of the view that the heart of the crisis now facing the judiciary is the poor judgement of Mr Justice Woulfe.

It is hard to see how serious and legitimate concerns about that matter can be resolved by a temporary loss of income, or a period of time spent in Coventry.

“It is the cumulative effect of this serious controversy that I have to consider,” the Chief Justice said, in relation to his decision to suggest that his colleague should resign.

The numerous jarring comments made by Mr Justice Woulfe during his interview with Ms Justice Susan Denham on September 8th, as revealed in the subsequently published transcript, always had the flavour of rupture that would be near impossible to repair.

The meeting held in the Four Courts on October 2nd between Mr Justice Woulfe and three senior judges – Donal O’Donnell, Iseult O’Malley and George Birmingham – was arranged, the Chief Justice said in the correspondence now published, because of a concern “that you did not appreciate the seriousness of the matter”.

Mr Justice Woulfe, the correspondence makes clear, has been repeatedly put out by the fact that the dealings he has had with the court since the end of the Denham review were not for the purpose of negotiation, but rather so that he could hear the harsh words that his colleagues felt it necessary to say to him.

“Your accounts and contentions have all been ventilated at very great length” both in the Denham review and subsequent “extensive correspondence”, the Chief Justice said to Mr Justice Woulfe in response to the judge’s complaint about the lack of negotiation.

The meeting with the three judges was held so that the newest member of the court could hear his colleagues’ views, the Chief Justice said. “The real burden of your complaint appears to be that your colleagues have been unwilling to share the benign view you take of all the matters involved here.”

It is terrible to have such an obvious gulf between a new appointee to the Supreme Court and the rest of the court, laid out in such excruciating detail.

The division is not about the wisdom or otherwise of Mr Justice Woulfe’s attendance at a golfing dinner in the middle of a public health emergency, but rather about how a person holding one of the most important judicial roles in the State, has dealt with the resulting controversy.

Even friends and sympathisers of Mr Justice Woulfe agree privately that he has repeatedly shown bad judgment. And further evidence of poor judgment, and jarring propositions, is contained in the correspondence that has now been published.

The Chief Justice said he felt he had no alternative to expressing his personal opinion that Mr Justice Woulfe should resign, in circumstances where the judge “while suggesting that you will apologise and made amends” was maintaining “that you did little wrong”.

A similar point arises from the former attorney general’s response to criticism of his ill-advised comments during the Denham interview. Mr Justice Woulfe said he had thought the interview was private and that he would not have said what he said if he’d known his remarks were to be published.

It’s not the type of defence you really want to be hearing from someone who has been chosen by the Government for appointment to the State’s top court.

It is the unanimous view of all the members of the court that Mr Justice Woulfe has been the cause of “very significant and irreparable damage” to the court, the Chief Justice said in the correspondence.

That Mr Justice Woulfe should continue to be a member of the court, and receive a salary of in excess of €200,000 a year, when public confidence in him has been so damaged, cannot be good for the administration of justice.

He’s been treated roughly, though not necessarily unfairly, by his judicial colleagues. But what’s been done to date hasn’t resolved the problem.

Now maybe the Oireachtas, and the Government that nominated Mr Justice Woulfe, need to consider whether the time has come for them to get involved.