Woulfe tells Chief Justice he does not intend to resign

Criticism of attendance at ‘Golfgate’ dinner based on ‘misunderstanding’, judge claims 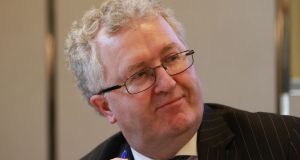 Mr Justice Séamus Woulfe said he had not intended to create the impression that he blamed the media for the ‘Golfgate’ controversy. Photograph: Nick Bradshaw

Mr Justice Séamus Woulfe has told the Chief Justice, Frank Clarke, that he does not intend to resign.

In a letter on Monday, Mr Justice Woulfe repeated a view that he had expressed to Mr Justice Clarke during a brief meeting between the two men last Thursday in the Four Courts.

“The fact that the President of a Court to which I belong and a man for whom I have the utmost personal and professional respect, and whom I regard as a friend, should express even a personal view that I should resign, is something of the utmost seriousness which I have to consider and reflect upon, not only from my own perspective, but from the perspective of the institution of the judiciary and the importance of the independence of each individual member of the judiciary,” he said.

Mr Justice Woulfe said he had to consider whether he should resign to avoid damage or further damage to the judiciary, a matter he regarded as of the utmost importance.

“Equally, I have to consider the circumstances under which a judge should resign under pressure from a fellow judge or judges, and the implications of a resignation in such circumstances for the independence of individual judges.

“I have, as you can imagine, thought very deeply about this and have taken extensive advice from a number of people,” he said. “I have come to the conclusion that I should not resign.”

Mr Justice Woulfe, who was appointed to the Supreme Court in July, then went on to explain his position.

He said it was simply not true that he had sat down to dinner in Clifden with 80 people. “I attended dinner in a room with 45 people,” he said.

He said he had not intended to create the impression that he blamed the media for the controversy, to the extent that he did not appreciate any genuine public concern about the event. “My point was that the entirely understandable public concern and, indeed, outrage, was based on the assumption that I had attended a dinner in a room with 80 people.”

Addressing the issue of his having made remarks critical of members of the Government, Mr Justice Woulfe said he believed his interview by the former chief justice, Susan Denham, on September 8th, was to have remained private.

The public controversy over his remarks “arose from the fact that you, in your role as Chairman of the Judicial Council, along with your judicial colleagues on the council, decided to publish the transcript” of the meeting.

Mr Justice Woulfe said that at the time of the interview he was under “the most intense pressure, personally, physically and emotionally”.

He was “in effect, fighting for my professional life and reputation and speaking the truth as I understood it.”

As to his comment that he feared some of his judicial colleagues might have prejudged him, Mr Justice Woulfe said he “would not have made such a comment about any of my fellow judges had I known that the transcript of this meeting would be made public”.

He quoted from an email he sent Mr Justice Clarke in the wake of a meeting on October 2nd with Mr Justice Donal O’Donnell, Ms Justice Iseult O’Malley and the president of the Court of Appeal, Mr Justice George Birmingham, (who is an ex-officio member of the Supreme Court).

Their collective demeanour was “unexpected, upsetting and traumatic, and has added very significantly to an already stressful situation,” Mr Justice Woulfe said in the email.

Mr Justice Woulfe, in his letter sent on Monday, said he did not believe any of the three reasons given by the Chief Justice for his resignation, individually or collectively, “remotely constitute substantial grounds” for his resignation.

Earlier in his letter Mr Justice Woulfe said he would accept a reprimand for his having attended the Golfgate dinner, even though “I believe it is based on a misunderstanding”.

He also said he was willing to accept that he would not be assigned to hear a Supreme Court case until February of next year, and that he would give his salary for three months to a charity “if that would ensure resolution” of the crisis.

Mr Justice Woulfe argued that the correspondence between the two men should not be published.