Cork suspected murder-suicide may have been over disputed will 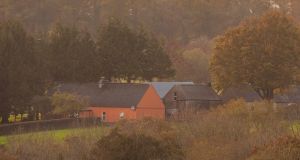 Farm buildings at he scene of a fatal shooting at Assolas, near Kanturk, North Cork. Photograph: Daragh Mc Sweeney/Provision

Gardaí investigating the deaths of a father and his two sons in what they believe was a murder-suicide are hoping that post-mortem examinations on Tuesday will help them establish what exactly happened to the family in their home in north Cork.

Gardaí described the incident, which claimed the lives of Tadhg O’Sullivan (59) and his two sons, Mark (26) and Diarmuid (23), as a terrible tragedy as relatives were last night comforting Mr O’Sullivan’s widow, Anne (60) who had recently come out of hospital following surgery.

Gardaí say they are keeping an open mind on what led to the tragedy but say they are inquiring whether the shootings may have been related to a dispute over a will that would have seen Diarmuid miss out on a share of the family farm at Castlemagner near Kanturk.

The farmhouse, where the body of Mark O’Sullivan was found in an upstairs room, was declared a crime scene and cordoned off by gardaí yesterday, while gardaí also cordoned off a field where the bodies of Tadhg and Diarmuid were found beside two rifles.

Assistant State Pathologist Dr Margot Bolster arrived at the scene at about 5.30pm and carried out a preliminary examination of the bodies.

Gardaí also requested the services of the Garda Technical Bureau from Dublin, and ballistic experts travelled to Kanturk to carry out examinations of the two rifles found beside Tadhg and Diarmuid O’Sullivan to see if one or both weapons were used to shoot Mark O’Sullivan.

Gardaí will await the results of Dr Bolster’s post-mortems at Cork University Hospital to establish how many times Mark O’Sullivan was shot but early indications were that Tadhg and Diarmuid O’Sullivan suffered single gunshot wounds.

“We’re going to have to await the results of the post-mortems but it’s possible that Mark suffered more than one gunshot wound while it would appear on a preliminary examination that Tadhg and Diarmuid suffered a single gunshot wound each,” said a Garda source.

“But we need to see the results of the post-mortems and the results of ballistic and forensic tests on the two rifles to establish whether they each shot themselves or did they shoot each other or did one person shoot the other and then shoot himself – that has all yet to be determined.”

Supt Adrian Gamble of Cork North Division later appealed at a press conference in Kanturk to anyone who might have any information that could assist in the investigation of the incidents to contact investigating gardaí at Mallow Garda station on 022-31450.

Gardaí under Chief Supt Tom Myers of Cork North Division appointed a family liaison officer to liaise with Ms O’Sullivan, who was being comforted by friends and neighbours.

Tadhg O’Sullivan was originally from Roskeen, between Mallow and Kanturk, and had married into the farm but never farmed or worked the 150-acre tillage holding. He was employed instead as a mechanic at Greenhall Motors in Buttevant about 15km away.

Mark O’Sullivan had a law degree from University College Cork and was working as a trainee solicitor while his brother had recently completed a degree in financial and business management. Diarmuid O’Sullivan is understood to have started working in the area. He had worked part time in a local hardware store in Kanturk while studying and it is understood he had become quite angry and aggrieved recently and was concerned he might not inherit a share in the farm, which is described as good tillage land.

The holding northeast of Kanturk had been leased out to neighbouring farmers for the past 30 years or so since Ms O’Sullivan’s father died.

Local Fine Gael councillor John Paul O’Shea from nearby Lombardstown said that as news began to emerge on Monday morning and afternoon, people in Castlemagner and Kanturk were stunned to discover such a terrible tragedy happening on their doorstep.

“There’s a total sense of disbelief,” he said. “The exact details of the case have to be confirmed but obviously it’s a very close-knit community in Castlemagner, so confirmation that three people had passed is very tragic and has been greeted with a real sense of grief and loss in the area.

“People will find it very hard to come to terms with it but I have no doubt the people of Castlemagner will rally around and support the family.”

Minister for Justice Helen McEntee extended her sympathies to “all those impacted upon by this tragic and disturbing incident”.

“I want to thank the gardaí and other emergency services who attended the scene,” she said.