Products could have resulted in potential loss of €924,000 in tax income – Revenue 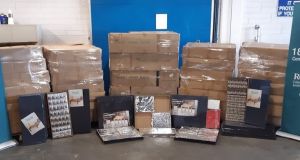 Chinese-sourced tobacco and cigarettes worth more than one million euro have been seized by customs officials at Dublin Port.

The smuggled products were found in two batches – €815,000 worth of processed tobacco on Thursday evening and €234,000 worth of branded cigarettes earlier this month.

Those figures are estimated retail values, although combined they represented a potential loss in tax income of €924,000, according to Revenue officials.

The 432,000 cigarettes seized off a shipment from China earlier this month were branded MB Blue and Benson & Hedges. That is the equivalent of 21,600 boxes of 20.

“These seizures are part of Revenue’s ongoing operations targeting the shadow economy and the supply and sale of illegal tobacco products,” Revenue said.

Investigations into the shipments are ongoing.