Gardaí to arrest three men in connection with referee attack 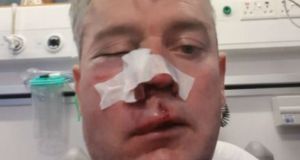 Referee Daniel Sweeney, who is originally from Dungloe, Co Donegal, has a broken jaw and fractured eye socket. He is unable to talk and can only drink through a straw

Gardaí have identified the people who assaulted a referee in a post-game attack on Sunday, leaving him with a broken jaw and fractured eye socket.

No arrests have been made but gardaí in Tullamore, Co Offaly, are confident of the identity of the suspects – three men in their 20s and 30s – associated with Mullingar Town FC, and believe they will be arrested very shortly.

It is understood the attack stemmed from an incident that occurred at the end of the match involving three players and a spectator during which a yellow card was issued.

A Garda spokesman said last night: “No arrests have been made and investigations are ongoing.”

Daniel Sweeney, originally from Dungloe, Co Donegal, but living in Mullingar, Co Westmeath, was refereeing a match between Horseleap United and Mullingar Town in Horseleap, Co Offaly, on Sunday.

After the match he was attacked in a pub car park beside the pitch as he was getting ready to leave. He was left with two fractures to his jaw, one fracture to his eye socket and multiple cuts and bruises, some of which required stitches.

The married father-of-two underwent surgery on Monday and is expected to require a further two weeks’ hospital attention including specialist treatment in the Royal Victoria Eye and Ear Hospital in Dublin.