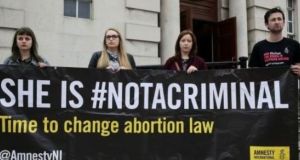 Campaigners demonstrate during a hearing in the case in September. Photograph: Brian Lawless/PA Wire

A Northern Irish schoolgirl whose mother is facing prosecution for buying her abortion pills was taken from a classroom by police and spoken to about the alleged crime without having a parent present, a court has heard.

A barrister for the mother outlined the circumstances of the case as she urged judges to rule that her looming prosecution is in contravention of human rights laws. The woman is taking a judicial review in Belfast High Court against the decision to charge her for procuring online abortion medication for her pregnant 15-year-old child.

The case, known as JR76, represents the latest challenge to the North’s restrictive abortion laws. Unlike other parts of the UK, the 1967 Abortion Act does not extend to Northern Ireland, meaning abortion is illegal except where a woman’s life is at risk or there is a permanent or serious danger to her mental or physical health.

Opening the case, the mother’s barrister Karen Quinlivan QC told a panel of three senior judges, including Lord Chief Justice Sir Declan Morgan, that the prosecution could have a “chilling effect” on women seeking help from their GPs.

The student had gone to her local doctor a week after taking the abortion medication. She was subsequently referred to a mental health counselling service, which in turn informed social services. Social Services then alerted the PSNI.

The barrister said investigating police officers then arrived at the child’s school and removed her from a classroom to speak to her in the absence of her parents. She said the teenage girl was “extremely vulnerable” at the time of her pregnancy, claiming her then ex-boyfriend was “physically and emotionally abusive” toward her.

Ms Quinlivan said the case centred on a “vulnerable child facing a crisis pregnancy in a jurisdiction which criminalises abortions”. She insisted the mother acted in her daughter’s “best interests”.

She quoted from a statement given by the teenager outlining why a toxic relationship with her former boyfriend had influenced her decision to terminate the pregnancy. “The idea of him being the father to my child and him being in our life in the long term made me physically ill,” the girl said.

The mother, who cannot be named for legal reasons, is facing two counts of procuring and supplying the abortion drugs with the intent to procure a miscarriage, contrary to the 1861 Offences Against the Person Act. She could face up to five years in prison if convicted.

The woman is taking a judicial review, claiming the decision to prosecute contravenes her human rights. The case is due to be heard over two days.

The mother is supported by Amnesty International and the Northern Ireland Human Rights Commission, which are both interveners in the case.

In the summer, the commission lost a Supreme Court appeal over the legality of the region’s abortion law, but a majority of judges said the existing law was incompatible with human rights law in cases of fatal foetal abnormality and sexual crime. – PA