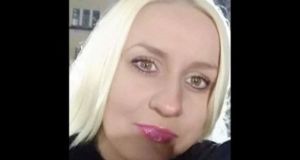 Giedre Raguckaite (29) has been missing since May 26th. Photograph: Garda Press Office

A house in Co Meath is being examined by the Garda Technical Bureau on Tuesday as part of the investigation into the murder of Giedre Raguckaite (29) earlier this year.

At a media briefing in Dundalk on Tuesday, gardaí appealed for anyone with information on her disappearance to contact them.

Garda Supt Gerry Curley from Dundalk Garda station said the last sighting of Ms Raguckaite was in the company of two men at the house in Laytown around 11pm on May 29th.

It is believed she was unconscious at the time. Supt Curley said: “We are concerned at the condition she was in at that stage when she was taken into the house.”

“Giedre was not seen leaving the house but we are satisfied that she left the house and the other two males left the house in the early hours of the 30th May 2018. She has not been seen since.”

She was reported missing to gardaí in Dundalk, where her last known address is, in August.

Ms Raguckaite had maintained regular contact with her family and friends and Supt Curley said: “we believe her disappearance is involuntary and we are seeking assistance from the public and particularly the Lithuanian community.”

Ms Raguckaite, a Lithuanian citizen, moved to Ireland from England earlier this year to look for work and has no family here.

Her last contact with her family was a phone call to her father at 6.35pm (Irish Time) on May 29th.

Ms Raguckaite is described as 1.67 meters tall, of thin build, between 8 and 9 stone, with shoulder length blonde hair, green eyes.

When last seen she was wearing a pink Tee-shirt and dark blue jeans. Anyone with information is asked to contact Dundalk Garda station on 042 9388400, the Garda Confidential Line on 1800 666 111 or any Garda station.