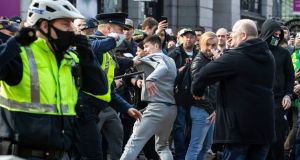 Gardaí in Dublin did not have adequate resources to deal with an anti-lockdown protest that took place in Dublin on Saturday, a member of the Garda Representative Association (GRA) has said.

GRA national executive member Damien McCarthy called on the Minister for Justice as well as the Garda Commissioner to meet gardaí to discuss the “very serious challenges” faced by officers.

He said a supplementary budget was required to ensure gardaí were adequately resourced and protected on the streets.

Mr McCarthy told RTÉ’s Morning Ireland the force faced “significant challenges” and it was important they had the capacity to respond to public order situations at short notice. It was clear that such action needed to be prioritised, he added.

Mr McCarthy said that there had been very little notice on Saturday about the protest, with no notification about a public event. He said some of those at the protest “went with the intent of inflicting harm on the Garda Síochána”.

He said the demonstration and the scuffles that broke out during it showed why frontline gardaí needed to be pushed up the vaccination priority list.

These are very serious matters and it is now important that the gardaí be “pushed up the (vaccination priority) list” said Mr McCarthy. “There is a clear case now that they have to be prioritised.”

Thirteen people were charged with public order offences related to Grafton Street incident before a special sitting of the Dublin District Court and arrests from the group who launched fireworks at officers are also expected.

It is understood that the group of men involved in firing fireworks at gardaí are from the Monkstown/Dún Laoghaire area and have a history of anti-social behaviour.

Gardaí have footage and images of the group preparing the firework to be fired during the mid-afternoon stand-off between gardaí and anti-lockdown protesters.

One of the group’s members, a 30-year-old from south Dublin, then brings it up to the line of gardaí and fires it towards an officer.

Gardaí have identified this man and some of his accomplices and expect to make arrests soon. One of his associates, who can be seen on video attempting to kick gardaí, is understood to be a 27-year-old from south Dublin who has several previous convictions.

Three gardaí suffered injuries during the violence, with one due to undergo surgery on a fractured ankle. Another garda suffered a perforated eardrum.

Many more gardaí suffered “bumps and bruises” from projectiles and scuffles with the crowd, sources said, while others were left shaken by the incident.

Garda Commissioner Drew Harris on Saturday initially said elements of the far right and far left were involved in the violence. His statement fuelled speculation among far-right groups that those who instigated the violence were left-wing agents provocateurs.

Mr Harris subsequently issued a statement on Sunday clarifying that there was no far-left involvement. It is understood gardaí and Mr Harris initially believed members of Saoradh, a far-left dissident republican group with ties to the New IRA, were present as counter protesters.

Members of Saoradh have previously counter protested right-wing events. However, there is no evidence they were involved in any violence on Saturday.

Mr Harris said the vast majority of those who took part in the protest “belong to a number of factions including anti-vaccine, anti-mask and anti-lockdown protesters, far-right groups and those intent on trouble and disorder”.