Funeral of murdered Cork man hears of ‘shock and sadness’ 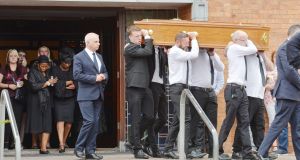 The remains of Joe O’Callaghan, Douglas are taken from the Church of the Incarnation in Cork, following requiem mass with his widow Angeline being comforted as she walks behind. Photograph: Provision

A nephew of a Zimbabwean woman, whose Irish husband was found dead in a pool of blood in Cork, has thanked locals and the African community for coming out in numbers for the “sad occasion” of the requiem mass of the murder victim.

Joe O’Callaghan (66) was discovered in the hallway of his bungalow in Galway’s Lane, Douglas in Cork city by his wife, Angeline, shortly after 8am on Monday.

Angeline had returned from working the night shift and raised the alarm immediately when she came across her husband in a bloodied state at their home. He was pronounced dead at the scene.

A murder investigation was opened after it was established that the father-of-three had died violently.

At a requiem mass in the Church of the Incarnation in Frankfield, Cork today Victor Thomas, a nephew of Angeline Kikins O’Callaghan, said they were thankful for the presence of mourners from both communities.

He offered solace to the O’Callaghan family stressing that his extended family shared their grief.

“To the O’Callaghan family - your loss is our loss. Your tears and your grief is ours.”

Mr Thomas thanked chief celebrant, Fr Kevin O’Regan, for his assistance and said that he was honoured to be able to offer his appreciation on behalf of his aunt.

Fr O’Regan, parish priest, said that losing a loved one so suddenly was comparable to a power cut when you stumble around the house looking for sources of light.

He said mourners were gathered “in shock and sadness” following the passing of Mr O’Callaghan.

“When news of Joe’s death was broken last Monday it was like going to that darkness of not knowing how this happened. How could this be? People are still in that darkness. In that shock.”

Fr O’Regan was joined on the altar by a family friend Fr Liam Kelleher. The offertory gifts of bread and wine were brought to the altar by Angeline and a sister of the deceased, Sheelagh Thornhill.

Mr O’Callaghan was married to Angeline for over a decade. He was previously married and had three children Deirdre, Victoria and Brendan.

He is also survived by his step children Annalisa, Marshall and Lorraine and his eight siblings. He was laid to rest at St John’s Cemetery in Ballinrea following 11am mass on Saturday.

A 22-year-old man, who voluntarily presented himself to gardaí, was arrested and released without charge earlier this week. A file will be prepared for the DPP. It is understood he was known to Mr O’Callaghan.

A post mortem examination was carried out at Cork University Hospital by Assistant State Pathologist Dr Margaret Bolster. The results have not been released for operational reasons.

However, it is understood the father-of-three sustained head injuries and died following the attack. Door to door enquiries have been carried out and gardaí are checking CCTV footage in the area.

Mr O’Callaghan lived in a cul de sac in the heart of Douglas village. One neighbour, who declined to be named, reported hearing a roar from the house in the early hours of Monday morning and the sound of a door slamming.

Joe O’Callaghan had worked a variety of jobs during the course of his life which he spent primarily in the Grange/Douglas area. His wife is a native of Bulawayo in Zimbabwe.