‘State probably facilitated purchase of gun that killed my father’

There were always questions, says son of Garda Richard Fallon, who died in 1970 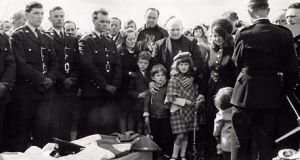 Finian Fallon has few memories of his father.

Fallon was only four years old when his father, Garda Richard Fallon, was shot dead in April 1970 by bank robbers – believed to be members of republican splinter group Saor Éire – who were trying to escape after raiding a bank on Arran Quay in Dublin.

“He caught up with one of the robbers and they turned around and he was shot twice. We were told he was dead before he hit the ground,” says Fallon.

At the time, Fallon knew nothing. “No one ever told me he was dead. I think for a long time I was expecting him to come back. I’m told I used to stand in the cot waiting for him, and I’m told I even had imaginary conversations with him after he had died.”

Garda Fallon (44) was the first member of An Garda Síochána to die as a result of the Troubles.

Photographs from the time show rows of uniformed gardaí standing to attention in front of his Tricolour-draped coffin, his cap set on top. Beside them are his black-clad widow and their five children, ranging in age from 12 to four, their faces angry, sad, bewildered.

“I remember walking to the graveyard and all these black overcoats surrounding me,” says Fallon. “I threw a daffodil into the grave after my father, but I nearly fell in after it and one of my brothers had to pull me back.”

As the family grieved, rumours began to circulate.

“The stories about my father’s case, they’ve always been there,” says Fallon. “I can’t remember anyone telling me about them, but there was always a question about the circumstances of his murder and what involvement the State might have had.

“What I’m alleging is that the government, the Irish State, probably facilitated the purchase and supply of the gun that killed my father, and also that they helped cover up the aftermath of it.”

This has consistently been denied by the government. In a statement to The Irish Times, the Department of Justice described Garda Fallon’s murder as “an utterly unjustifiable act of violence”.

“His murder while serving and protecting the State was a direct attack on the State, and his attempt to arrest one of the gunmen in a situation of great danger was heroic and a testament to his integrity in carrying out his duties as an officer of An Garda Síochána,” the statement said.

Garda Fallon’s death came a month before the sacking of future taoiseach Charles Haughey and senior government minister Neil Blaney. The subsequent Arms Trial put the question of official involvement in the illegal importation of arms in the spotlight.

Haughey, Blaney and others were accused of conspiring to import weapons to arm the Provisional IRA in order to defend Nationalist communities in the North. The charges against Blaney were dropped; Haughey was acquitted.

To Fallon, his father’s death is an integral part of the chronology of the Arms Trial.

“I would go as far as to say that had my father not been killed, by a gun imported with the State’s covert co-operation, arms importations would have continued in the South,” he says.

Senior civil servant Peter Berry said in a 1970 statement that small consignments of arms were being imported by the IRA into Dublin Airport and Dún Laoghaire port, and that Special Branch had information that one such consignment went to the gang robbing banks who later, on April 3rd, 1970, were to shoot Garda Fallon.

“It was freely said in Special Branch circles that Mr Charles J Haughey was aware of what was going on,” Berry stated.

This was echoed by the former justice minister Des O’Malley, who told the Dáil in 2001 that “there is some reason to believe Garda Fallon may have been murdered in April 1970 with a weapon which had been part of earlier illegal arms shipments into the State”.

“There is also reason to suppose that some senior gardaí suspected that a prominent politician was fully aware of this earlier importation and had turned a blind eye to it.”

In 2007, the then minister for justice Michael McDowell, rejected this. “The truth is the gardaí­ were aware of the source of the firearms in question, and it was not a conspiracy involving any person at political level. It was low-life Dublin gangland people who sourced the weapons in Birmingham.”

He also ruled out the possibility of a public inquiry, saying had studied the files at length and he was satisfied that there was no cover-up.

Fallon disputes this. Three men were arrested and tried for his father’s murder but acquitted; years later, Fallon met one of them.

“He admitted that he was involved at the time in terms of the general criminality that was going on, but he had nothing to do with my father’s case.

“He reckoned he was framed for it and suggested something untoward was going on.”

Indeed, in 1970, Saor Éire had taken the unusual step of issuing a statement denying involvement and calling for an independent public inquiry into Garda Fallon’s death.

“Allegations were made in the Dáil that the State knew exactly who was involved,” says Fallon, “and Deputy L’Estrange said the State helped them escape from Dublin”.

“One of those men who murdered Garda Fallon was brought down to the Greenore ferryboat in a State car,” Gerald L’Estrange – a Fine Gael TD — told the Dáil in November 1971.

He did not specify who the owner of the vehicle might be, but it has since been suggested that it belonged to Neil Blaney.

When asked about the Blaney connection, Fallon – who went to school with one of Blaney’s sons – recounts how he attended a party at the Blaney household at the age of nine or 10.

“I saw Neil Blaney and I said, ‘Hello Mr Blaney. My name is Finian Fallon. My father was Garda Richard Fallon’, and he shouted, ‘What’s he doing here? Get him out of here.’

“I don’t know about the Blaney story, whether or not it’s true, but that happened to me.

“His sons always denied he had any involvement and my brothers were friends with them, so I don’t disbelieve them in terms of their knowledge.

“But it’s been given as fact now, so I don’t know. It wouldn’t surprise me.”

Fallon’s brother later met another of the men acquitted of his father’s murder – who said that one or more of them had been helped by “the State security apparatus” and by the seaman’s union to escape from Dublin port.

“Apparently they . . . sealed them into the hold of a ship to get them out.”

Over the years, Fallon has met privately with senior figures in government and in the Garda­ who, he claims, have confirmed what the family has always contended.

The Serious Crimes Review Team (SCRT) completed a re-examination of the case in 2015, but Fallon says it took six months to locate the case file, and the review was “made up of very little because there was no evidence left”.

“It had all disappeared by that stage, including a car and some fingerprints that had miraculously floated out of a file during a flood. The only evidence remaining apparently is some bullet casings that were picked up by local children.

“It seems at best inept, and at worst intentional.”

The Department of Justice rejected this. In a statement, it said the SCRT had carried out a thorough review of the case, which included “an examination of all available material, attempts to identify any new investigative opportunities, and examination of the original investigation”.

“It must be emphasised that no evidence was uncovered in that review to indicate any collusion or cover up on the part of the State with regard to the murder of Garda Fallon.

“If, at any point, any new or credible evidence should emerge that would shed further light on the circumstances surrounding Garda Fallon’s murder, that evidence will be pursued fully by the Garda authorities,” the statement said.

Fallon – who is a chartered psychologist with a doctorate in psychotherapy – will be among a number of victims and survivors of the Troubles from the Republic who will meet representatives from the Department of Foreign Affairs and the Northern Ireland Office on Tuesday to consider their responses to the UK government’s current public consultation on the legacy of the Troubles.

Organised by Innocent Victims United (IVU) — which represents some 11,500 victims and survivors in 23 groups in both parts of Ireland and in the UK – their aim, according to spokesman Kenny Donaldson, is to ensure that “whatever flows post the consultation [in Northern Ireland] is as much as possible mirrored” within both the UK and the Republic.

“Victims and survivors should not be discriminated against on the basis of where they happen to live,” says Donaldson. “They should have equality of access to support services and other interventions, including reparation packages.”

The Department of Justice stressed that the Government has made clear on many occasions its commitment to the acknowledgement of and support for the victims of Troubles-related violence, and it continues to provide funding for victims groups and to cover certain medical needs.

Legislation is required to provide for co-operation with the proposed legacy bodies in the North, and the Minister for Justice is “advancing these proposals as a priority”, the department said in its statement.

Fallon’s preferred option is a South African-style truth and reconciliation commission, in which “the people involved should be called to account”.

“Let the cards fall where they may,” says Fallon.

“It would be a great relief to hear the truth and for the Irish Government to acknowledge its hand in my father’s death. Ideally I think they should apologise for their involvement in his murder.”

Does he think they will? “No, but it doesn’t mean I’ll ever stop trying.”