Gangland criminals opting for cheaper cars to fly under radar 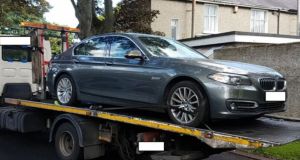 A file photograph of a stolen BMW being recovered by gardaí. Many criminals involved in organised crime are now opting to drive less ostentatious vehicles. Photograph: Garda Síochána

Many criminals involved in organised crime are now opting to drive lower-value, less ostentatious vehicles in a bid to avoid attracting attention, the Criminal Assets Bureau (Cab) has said.

The development comes after the laws were changed to allow the bureau to target assets valued as low as €5,000. Before the amendment to the Proceeds of Crime Act, the threshold was €13,000.

In its annual report for 2017, published on Thursday, Cab said it not only seized vehicles owned by gangland criminals but also targeted garages owned by criminals that were suspected of being used to launder and hide the proceeds of crime.

The number of new “proceeds of crime” cases in the courts initiated by Cab last year, as it pursued cash and other assets, was 28, the largest number in any of the bureau’s 21 years. In comparison, there were 13 new cases in 2016.

Assets valued at some €7.02 million were frozen by the High Court order last year, compared with €643,000 in 2016. In the new cases, some 100 assets were frozen – including vehicles, property and jewellery – last year compared with 34 the previous year.

One of the cases recorded in the annual report was that of a bitcoin trader who was caught selling drugs via the dark web from Dublin.

It was the first time anywhere in the world law enforcement officers had seized a cryptocurrency “brain wallet”; a code committed to memory that allows the holder access to their bitcoin to spend or trade.

The bitcoin was owned by Dubliner and convicted drug dealer Neil Mannion (37), a former Eircom worker who quit his job in 2013 and set up online businesses. One was an e-cigarette business, another an auction website and the third an online market place for illicit drugs.

Mannion offered a variety of drugs for sale via his marketplace on the dark web. The orders were paid for in bitcoin and the drugs were sent to buyers via the postal service from central Dublin all over the world.

Customers could post reviews about Mannion’s customer service, the quality of the drugs he sold and the techniques he used to conceal the drugs in the post.

He secured a 90 per cent approval rating in the reviews and told gardaí his online business “just flew”. He never expected to get as many customers as he did.

Mannion, of Mount Drummond Avenue, Harold’s Cross, Dublin, employed a film technician from Clonskeagh, south Dublin, to fill the orders. He packed the drugs and posted them as the orders were received and was paid €600 per week.

However, in 2014 the Garda was alerted to suspicious activity linked to an internet protocol (IP) address. Gardaí traced the physical premises the IP address was located in: Bank House Business Centre, South Circular Road, Dublin.

Gardaí put it under surveillance before raiding it and finding a selection of drugs valued at €143,000, including LSD, amphetamine and cannabis resin. Mannion pleaded guilty and was jailed for 6½ years in December 2015.

However, the investigation into him and his assets has continued since then. And Cab last year obtained the “brain wallet”, where it accessed and froze €800,000 in bitcoin from Mannion’s drug deals.