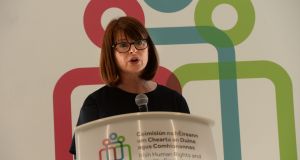 Emily Logan, chief commissioner of the Irish Human Rights and Equality Commission, said it was not the responsibility of victims to avoid being targets of hate crime. Photograph: Cyril Byrne/ The Irish Times

Specific legislation is needed to crack down on hate crimes which remain under-reported in Ireland, a new report has said.

The “Lifecycle of a Hate Crime”, published on Wednesday, is the product of two years of work co-ordinated by the Irish Council for Civil Liberties (ICCL) and funded by the European Commission.

It found the lack of specific law in Ireland has caused a “policy vacuum” and that the “hate” aspect of crimes is gradually filtered out as an investigation and complaint make their way through the criminal justice system.

The ICCL believes the research should be considered in the context of Ireland’s poor international record – a European Union Agency for Fundamental Rights survey ranked Ireland third among 12 member states for harassment of people of African background.

“It is not the responsibility of victims to avoid being targets of hate crime,” said Emily Logan, chief commissioner of the Irish Human Rights and Equality Commission (IHREC), ahead of the report’s launch.

Between 2006 and 2014, gardaí recorded an average of 158 crimes with a discriminatory motive each year, the majority of which were identified as racist

“The State, as the principal duty bearer, has a responsibility to send a clear message to society that hate crime is not tolerated.”

Ireland was one of a number of countries examined in relation to the approach toward hate crime, alongside Czech Republic, Latvia, Sweden, and England and Wales.

It said there was no legislation in Ireland which required a court to take a bias motivation into account when considering sentence in a criminal case.

The Prohibition of Incitement to Hatred Act 1989 is aimed at criminalising hate speech and is therefore narrow in scope, according to the report.

Between 2006 and 2014, gardaí recorded an average of 158 crimes with a discriminatory motive each year, the majority of which were identified as racist.

In 2015, the Pulse system, which records criminal reports, expanded the range of categories of discriminatory motivation to include, among others, anti-Muslim, anti-Roma, anti-Semitism, anti-Traveller, homophobic and sectarian roots.

There is no certainty that a hate motivation will be presented in court. There is no way of recording that an offender has committed a hate crime

After this, the report said, the number of crimes recorded as having a discriminatory motive increased “dramatically” from 114 in 2014 to 308 in 2016.

Even still, the report’s findings “support the view that this figure under-represents the real figure of hate crime in Ireland and that both under-reporting and under-recording remain a challenge”, it said.

“There is no certainty that a hate motivation will be presented in court. There is no way of recording that an offender has committed a hate crime,” said the report’s author, Dr Amanda Haynes.

“Hate crime simply is not part of the language of the Irish criminal justice process.”

The report found the “vast majority” of legal defence practitioners and gardaí responded positively to the idea of hate crime legislation.

As such, it has recommended the development of mechanisms to gather and publish data on the prosecution of discriminatory crime and bespoke legislation to combat it.

1 Tributes paid to Ireland’s deputy ambassador to China who died on Sunday
2 Coronavirus: No new Covid-19 deaths reported in State for first time since March
3 Coronavirus: What will reopen in Ireland’s phases to ease restrictions and what are the dates?
4 Unidentified man has been in Irish psychiatric hospital for 30 years
5 Dominic Cummings defends 400km journey and says he never considered resigning
Real news has value SUBSCRIBE