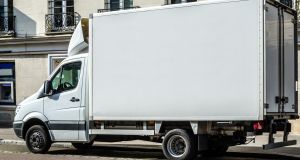 Four suspected illegal immigrants were arrested after reportedly getting out of a lorry at a petrol station. File photograph: Getty Images/iStockphoto

Gardaí arrested four suspected illegal immigrants in Co Laois on Monday night. The four men, all in their 20s, were arrested near Ballacolla at 10.30pm.

It’s believed they were arrested after they got out of a lorry at a petrol station in Grantstown.

They are believed to have entered the country at Ringaskiddy in Co Cork, having travelled through Spain.

Gardaí confirmed they had arrested four males in their 20s for immigration offences in Ballacolla.

They said: “All four males were brought to the Bridewell Garda station, Co Cork. Investigations are ongoing.”

The four men have requested asylum.