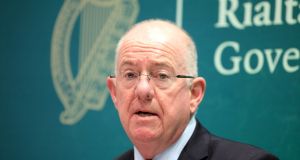 Not all of the Garda or Department of Justice reforms recommended require money and €10 million set aside in the budget to begin the reform process is enough for next year, Minister for Justice Charlie Flanagan has said.

However, Sinn Féin’s spokesman on justice Donnchadh Ó Laoghaire said the allocation “would be nowhere near enough” to bring about the changes recommended.

The Commission on the Future of Policing in Ireland reported last month on the changes needed in the Garda. And the implementation of the 2014 Toland Report, which recommended many changes in the Department, remains a work in progress.

Speaking at a post-budget briefing in Dublin on Wednesday, Mr Flanagan defended the policing commission’s proposal to immediately create an independent board for the Garda. He likened the proposal to the boards of semi State bodies.

“Like semi states; the Garda commissioner, as chief executive, will be supported by a board,” he said, though he cautioned an implementation body for Garda reform had yet to be established and set out its priorities and plans.

When asked if additional monies not outlined in Budget 2019 on Tuesday would be made available for Garda reform when that timetable for reform was devised, Mr Flanagan pointed to the €10 million earmarked in the budget.

He said that sum would be used to fund both reform programmes next year, though many Garda and justices sources questioned how much could be achieved with the relatively modest sum.

However, Mr Flanagan said not all of the reforms for the Garda and Department were dependent on funding.

And when it was suggested €10 million was too small a sum given the extent of the reform required, he said the money would enable a start to be made on Garda reform. And funding could be reviewed when future budgets were being set.

“It’s not expected that the full implementation of the Commission on the Future of Policing - the 50 recommendations - will be carried through in their entirety next year,” he said.

“But I’m really keen that we can make a very early and significant start,” he added.

Mr Flanagan said that before the end of the year he planned to recommended to Cabinet an implementation group for the Garda reform and a chairperson.

However, the Garda also needed many expensive items including new ICT systems and body worn cameras, among others. He also said the creation of crisis intervention teams - to assist people in need who present to the Garda out of hours - also required investment from both the Garda and health and social services agencies.

The Commission on the Future of Policing in Ireland made more than 50 recommendations ranging from the merging of garda oversight bodies and the creation of new ones to proposals on garda training and major investment in technology and other areas.

In 2014 the Toland Group carried out an independent review of the Department of Justice. It concluded the department was close, secretive and silo driven with “significant leadership and management problems”.

The report recommended a change in the leadership and management routines and systems as well as a structured approach to how agencies and key relationships are managed so they are more accountable.

One key recommendation was a restructuring of the department into portfolios of justice and home affairs, the former dealing with criminal and civil law reform, crime and security, the latter responsible for policing, prisons, courts, equality and integration.

However, a review by consultants EY published in February noted how splitting up the department had not occurred four years on though it was still urgently needed.

It also said a “paradigm shift in mind set” was still needed in how the department approach transparency and dealt with other agencies and the media.