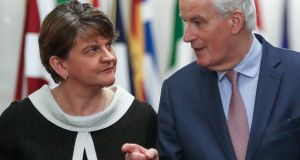 Party leader Arlene Foster told journalists in Brussels after meeting Mr Barnier that the “current text is not a fair representation of the joint report agreed in December”.

“The joint report in its totality needs to be reflected,” she said, insisting that the DUP is “ad idem” with British prime minister Theresa May on the issue. She repeated that no UK prime minister could sign up to such a deal.

The latter attacked Taoiseach Leo Varadkar for his hard stance on the Border issue, who he said was playing “Russian roulette” with the Republic’s economy. He said the Republic would be affected much worse by checks on the Irish Sea because of its dependence on trade with the rest of the UK.

Ms Foster said they had told Mr Barnier that all of the elements of paragraphs 49 and 50 of the December agreement needed to be incorporated in the draft.

That included references to the two British preferred options for preserving the frictionless border – both are conditional on success in the “future relationship” talks – and to the guarantees by the UK that it will not allow trade barriers to goods from the North entering the British mainland.

The latter have been seen by EU negotiators as purely an internal UK matter. The draft currently only incorporates what has been termed as the “backstop” position, the fallback default should no overall deal be done, and which essentially would keep Northern Ireland in the EU customs union with customs controls required on the Irish Sea.

Ms Foster also drew attention to what she said was an unacceptable rewriting in the draft of the Belfast Agreement’s provisions on the scope of North-South bodies.

Mr Dodds said it was “ironic” to see talk about doing away with controls on the island of Ireland when the EU wanted to set up controls between two parts of the UK. The commission proposals in this regard had united politicians in Westminster in opposition.

He said their meeting with Mr Barnier had been constructive, and they had a sense they were “being listened to”.