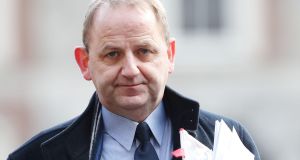 Sergeant Maurice McCabe arrives to give evidence at the Charleton tribunal in Dublin Castle. Photograph: PA

A former head of the Garda Press Office is to say that he never told Sgt Maurice McCabe about a smear campaign using text messages written by the then Garda commissioner Martin Callinan, the Charleton tribunal has heard.

In dramatic evidence to the tribunal on Monday, Sgt McCabe told the tribunal of a 2016 meeting with Supt Dave Taylor during which he said he was told “hundreds” of text messages were composed by Mr Callinan and forwarded to senior Garda officers, journalists, and politicians, on Mr Callinan’s orders.

He said he was told the next day the number of texts involved could have been “thousands”.

Sgt McCabe said he was told the texts referred to a false allegation of child sex abuse that had been made against the sergeant in 2006. The allegation was dismissed at the time by the Director of Public Prosecutions.

At the tribunal on Tuesday Tara Burns SC, for Supt Taylor, said her client would say the texts he referred to during his meeting with Sgt McCabe in September 2016 were texts he would send in response to media appearances of Sgt McCabe and were not about the dismissed 2006 sex abuse allegation.

The tribunal is investigating whether there was a smear campaign conducted against Sgt McCabe by Garda Headquarters.

Sgt McCabe, in his second day giving evidence to the tribunal, said that was “absolutely false”.

He said the word “pusher” was used by Supt Taylor in relation to Ms O’Sullivan in the context of text messages being composed by Mr Callinan for dissemination.

Ms Burns said her client accepted that a large number of texts were sent by him to senior management in relation to Sgt McCabe but that they were not in relation to the 2006 sex abuse allegation.

“I have to completely disagree with you,” Sgt McCabe said.

The tribunal chairman, Mr Justice Peter Charleton noted “a chasm” had now opened up between the position of Sgt McCabe and Supt Taylor as to what had been said during the September 2016 meeting.

He said both Supt Taylor and his wife had told him that they had believed the rumours and had hated to see him in the media because of them.

Sgt McCabe said Supt Taylor said Mr Callinan compiled all the texts and Supt Taylor got them and sent them on.

Ms Burns asked why it was necessary for hundreds of text messages to be composed if they were all about the 2006 allegation? The same message could have been copied and forwarded, she said.

Sgt McCabe replied he had nothing to gain for saying what he was saying about Supt Taylor. “This is exactly what he said to me.”

Ms Burns said her client also had nothing to gain for what he was saying.

“He one thousand per cent said that Martin Callinan compiled the texts and sent them out to him. It’s extremely hard to make that up.”

Sgt McCabe said it was not the case that he was misremembering what he was told. “It’s his word against mine at this stage.”

He agreed the only person he heard back from in relation to the alleged smear campaign involving hundreds if not thousands of texts, was from John McGuinness of Fianna Fáil.

He said he may have been told something a few years earlier by Irish Examiner journalist Mick Clifford.

On Monday Sgt McCabe told the tribunal of a meeting with Mr McGuinness in May 2016 during which, he said, he was told that Mr Callinan had made a false allegation to the politician that Sgt McCabe had abused his own children and was not to be trusted.

Sgt McCabe is continuing his evidence.