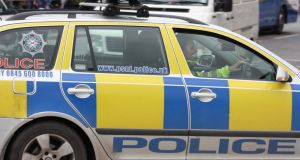 Police in Northern Ireland are investigating a fire in a car on the A2 this morning.

Army bomb disposal experts have been called to examine a car which caught fire on a main road in Northern Ireland.

The incident, which police have described as ongoing, happened at about 8.30am on the A2 between Belfast and Bangor.

The female driver was not hurt.

A spokesman for the Police Service of Northern Ireland (PSNI) said ATO (Ammunition Technical Officer) had been tasked following initial enquiries at the scene which is close to the junction of Ballyrobert Road.

The road remains closed while the investigation into the circumstances of the incident continue.

There are no further details at present, the PSNI said.