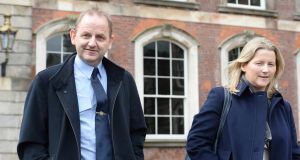 Finally, one of the most talked about men in Irish political and policing history took the stand at the Charleton tribunal yesterday.

Maurice McCabe, a quiet-spoken garda sergeant, has caused upheaval in government and justice circles since he began blowing the whistle on dubious Garda practices. His claims and the controversies they caused finished the careers of ministers and top civil servants and almost brought down the Government at the end of last year.

And yet, we had never heard from McCabe himself, even though everyone knows what he looks like from the mountain of photographs and video clips of him walking in and out of Leinster House or various meetings, not to mention the shots of him directing traffic in Mullingar in his high-vis jacket as a taoiseach bustles across the road to hail him.

McCabe has generated acres of newsprint. TDs in the Dáil often refer to him by his first name.

So when his turn came to give evidence at the tribunal investigating whether he was the victim of a top-level smear campaign, his evidence was keenly anticipated.

With all that has happened, whether he likes it or not, Maurice McCabe set the bar awfully high for himself.

Patrick Marrinan, for the tribunal, took McCabe through his story. It was long and complicated, shot through with familiar names and familiar snippets of episodes which jogged the memory about feverish Dáil scenes and front-page splashes which were major news not so long ago.

The sergeant testified in uniform, in his carefully pressed shirtsleeves with three stripes on the arm. He seemed relaxed. The public gallery – sparse in the morning, bigger in the afternoon – relaxed too as the session meandered on and on, with a confusing narrative and soporific examination of detail.

In the morning, the witness seemed a bit vague, trying to explain his deep anger and frustration with how he was treated, yet not always managing to show who was responsible for this and why.

As lunchtime beckoned in the drowsy hall, some of us began to wonder just what all this was about. It wasn’t until the afternoon session was well under way that McCabe’s appearance burst into life.

And after so much talk of who said what to whom and what they did or didn’t do and the diversions into bewildering background detail, it seems the reason for McCabe’s escalating nightmare can be put down to two words: penalty points.

While all was far from well for him following allegations of sexual assault by the daughter of colleague he had disciplined – subsequently dismissed as groundless by the DPP with no further action taken – and an unhappy work situation in Cavan where he felt his reports of serious malpractice were not addressed, things became immeasurably worse for him after he blew the whistle on senior gardaí wiping penalty points from the system for (often serial) transgressors.

Where did it begin?

Maurice McCabe was nearly 20 years in the job when he was promoted to station sergeant in Bailieborough. Until then, he seems to have had a fairly uneventful time in the force. That was all to change.

He routinely observed incidents of unprofessional conduct among his colleagues and eventually reported them. In the course of three years, the sergeant amassed a long list of misdemeanours committed by gardaí in Bailieborough and presented them to a superior officer.

He compiled 21 examples and, together, they presented a picture of a local policing system which was such a shambles it sounded almost comical.

Members not turning up on time, or not turning up at all; not going out on foot patrol; not keeping files in order; not investigating incidents; not attending calls; and not executing warrants.

Cliques forming and people taking constant tea and coffee breaks. Officers reading the newspapers and watching television while on duty.

One of the issues noted was: “Members constantly hanging around the station.”

It was like the behaviour of a gang of bored teenagers.

So there was that. And McCabe got a sympathetic enough hearing from his superintendent but a subsequent internal Garda investigation essentially found his claims to be much ado about nothing.

That outcome was “like a kick in the teeth”, said McCabe.

But there were more serious incidents, like the one involving an assault not properly investigated which would have grave consequences down the line in another part of the country.

Running alongside this was that groundless allegation of sexual assault, and a number of upsetting confrontations with the complainant’s family.

So many things not right and a dogged policeman making, one suspects, quite a nuisance of himself in his station and division for insisting on calling them out.

But it was his revelations about the penalty points which “really hit hard in the force”. Most colleagues were supportive but there were those who “would blank you”. McCabe didn’t sound surprised, explaining it was “the culture” in the ranks.

When then Garda commissioner Martin Callinan described certain whistleblowers as “disgusting” during an appearance before the Dáil’s Public Accounts Committee, he couldn’t believe it. “It was hard to take, extraordinarily hard to take.”

That’s when the “floodgates” opened for him and rumours about him began to circulate. The nadir for McCabe came when Fianna Fáil TD John McGuinness told him about a meeting he had with Callinan in which the commissioner said the sergeant was sexually abusing his daughters and his nieces.

“If I was to do it all over again, I would never have highlighted penalty points,” he said wearily.

McCabe could scarcely say the words he heard from McGuinness. He broke down, mopping the tears with a paper hankie, unable to go on.

The chairman asked gently if he would like to take a break.

“Yes,” whispered the witness, tears rolling down his face.

When they resumed, McCabe went on, battling at times to retain his composure. He painted a vivid picture of the scene in the carpark as told to him by the TD, the commissioner allegedly grabbing his arm at the end and saying “this is serious, this is serious”.

Callinan has denied this happened.

From then on, the evidence became more and more incredible as McCabe told how he eventually met former Garda press officer, Dave Taylor, who allegedly confessed to him that he sent out hundreds, if not thousands, of vile messages about him to senior gardaí, some politicians and some journalists.

The first thing Taylor told him was: “Look it, I destroyed you.”

According to him, Callinan was “obsessed” with McCabe and each time something favourable appeared about him in the media, the commissioner ordered that damaging text messages were to be sent out in response.

He said Taylor felt very sorry for what he did. He had been taking advice from a “spiritualist” and wanted to tell him what he had done.

Callinan wrote all the text messages and he, Taylor, sent them out. But his deputy commissioner, Nóirín O’Sullivan was “the pusher” behind this enterprise.

Every time she was sent one of these texts denigrating and spreading lies about McCabe, her alleged response was inevitably “perfect”.

You could hear a pin drop in the hall as this incredible story unfolded.

Maurice McCabe described everything Taylor told him in riveting detail. It was astonishing stuff.

The sergeant will be cross-examined on Tuesday.

The bar will be set even higher.