‘No UK prime minister could ever agree to it,’ British leader tells House of Commons

During Prime Minister questions, British PM Theresa May said that both her and her Foreign Secretary, Boris Johnson, were committed to no hard border between Ireland and Northern Ireland. Video: Parliament TV 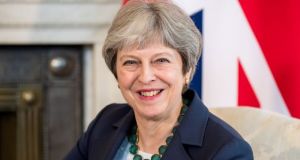 British prime minister Theresa May told MPs the draft legal text would “threaten the constitutional integrity of the UK by creating a customs and regulatory border down the Irish Sea”. Photograph: Chris Ratcliffe/Bloomberg

Theresa May has rejected the EU’s draft legal text, asserting that no British prime minister could agree to it.

Answering questions in the House of Commons on Wednesday, Ms May said she would tell European Commission president Jean-Claude Juncker that the draft was unacceptable.

“The draft legal text that the commission has published would, if implemented, undermine the UK common market and threaten the constitutional integrity of the UK by creating a customs and regulatory border down the Irish Sea, and no UK prime minister could ever agree to it,” she said.

“I will be making it crystal clear to President [Jean-Claude] Juncker and others that we will never do so.”

Ms May reaffirmed Britain’s commitment to avoiding a hard border in Ireland and said she stood by the joint report agreed with the EU last December. That agreement included a guarantee that there would be no barriers between Northern Ireland and the rest of the UK as well as the backstop of regulatory alignment on the island of Ireland.

“The negotiating team will be working with the commission to agree how we put that into legal text for a withdrawal agreement. Part of that agreement was, of course, that we will see no hard border between Northern Ireland and Ireland. Another part was. . . that there would be guaranteed access for Northern Ireland business to the United Kingdom market.”

Labour’s shadow Brexit secretary Keir Starmer warned against any deviation from the commitments made about Northern Ireland in December. He said the prime minister’s failure to offer any viable solution to the Border had come back to haunt her.  “Twenty months since the referendum, the government has yet to set out how it can achieve this without the UK remaining in a customs union with the EU. Jeremy Corbyn was clear at the start of the week that Labour would seek to negotiate a new comprehensive UK-EU customs union to help avoid any need for a hard border in Northern Ireland,” he said.

Conservative backbenchers joined DUP MPs in condemning the draft legal text during prime minister’s questions and in a subsequent exchange on the Border with cabinet office secretary David Lidington.

Jacob Rees-Mogg said Ireland would be the biggest loser if there was no deal and tariffs were imposed on Irish goods coming into the UK.

“There would be huge devastation to the Irish agricultural economy in particular. I wonder whether he has suggested to the Irish prime minister the question of whether he is willing to sacrifice the interests of the Irish economy on the high altar of European political integration,” he said.

Former prime minister John Major said on Wednesday that a customs union with the EU was the only way to avoid a hard border in Ireland. He called on Ms May to give MPs a free vote on any final deal she agrees with the EU.

“Brexit is a unique decision. It will affect the lives of the British people for generations to come. If it flops – there will be the most terrible backlash. If it is whipped through parliament, when the public are so divided, voters will know who to blame if they end up poorer and weaker. So, both democracy and prudence suggest a free vote,” he said.

“The deep divisions in our nation are more likely to be healed by a Brexit freely approved by parliament, than a Brexit forced through parliament at the behest of a minority of convinced opponents of Europe. A free vote would better reflect the reality that – for every 17 voters who opted for Brexit – 16 opted to remain in the EU.”