Garda Commissioner made comments at cross-Border crime conference with PSNI 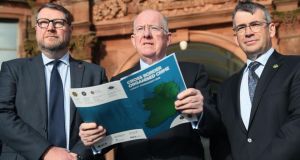 Dissident republicans will “undoubtedly” attempt to exploit any form of hard border post-Brexit for their own ends, Garda Commissioner Drew Harris has said.

While it was “inconceivable” the close co-operation between the Garda and PSNI in fighting crime and terrorism would cease next March after Brexit, there were security risks associated with the United Kingdom’s departure from the EU.

These included attempts by dissident republicans to use any form of hard border as an emotional rally calling around their outlook and terrorist aspirations. Illegal immigration and people smuggling were also a worry.

“It’s something they may wish to rally around,” Mr Harris said when asked of dissidents would seek to exploit any form of hard border.

“Undoubtedly, they will attempt to do that. But we have to make sure as policing organisations that we don’t create any form of emotional driver that they want to tie into.”

Mr Harris was speaking at a cross-Border crime conference involving the Garda and the PSNI in Newcastle, Co Down.

At the same meeting, acting PSNI Deputy Chief Constable Stephen Martin also expressed his concern at any return to a hard border that would look different to the seamless and invisible border at present.

Mr Martin said a hard border would be a “backwards step” that would bring “complications and difficulties”.

Minister for Justice Charlie Flanagan echoed those sentiments, saying he had stopped at the Border on his way to the conference and had difficulty establishing exactly where it ran.

“It is absolutely essential that we have a [Brexit] deal and secondly that that deal ensures that the Border between North and South remains frictionless, that we have no return to the borders of the past or no hard border,” he said.

Many living along the Border fear of any physical infrastructure being erected along what will be the border between an EU and non-EU country after Brexit, that it would be a target for terrorism attack.

Taoiseach Leo Varadkar recently brought a copy of The Irish Times to distribute to EU leaders at a dinner in Brussels. The newspaper contained a large feature about the concerns of locals in borderland communities that attacks such as bombings may resume of border infrastructure were installed.

Senior Garda sources have told The Irish Times they are very concerned that when Britain restricts ways for foreign nationals to live and work there, Ireland may be seen as a new soft route into mainland Britain.

The same sources said people may enter the Republic and register as asylum seekers with the sole aim of crossing the Border into the North and then travelling by ferry across to Scotland to illegally enter Britain.

Garda officers are concerned significant fees will be charged by gangs offering the smuggling, adding greatly enhanced security and immigration checks will be required within the common travel area for the first time.

Both Mr Harris and Mr Martin said illegal immigration and human trafficking would be a priority through and after the Brexit process.

Asked if a transit route would emerge involving landing in the Republic and travelling through the North into mainland Britain, Mr Martin said that form of illegal immigration or people smuggling was already a risk. Human trafficking was a “sinister and awful crime”.

Mr Harris added it was important for the PSNI and the Garda to remain attuned to a changing security environment due to Brexit.

“No matter what happens after Brexit we have to be very aware how the threat from organised crime might change,” he said.

“Obviously immigration crime and human trafficking is part of that and it is a priority for both organisations.”

Mr Harris and Mr Martin both believed that after Brexit a new legislative framework would be found to allow for Garda-PSNI co-operation such as sharing intelligence and suspects’ criminal records and arresting suspects in a way facilitated by the European arrest warrant at present.