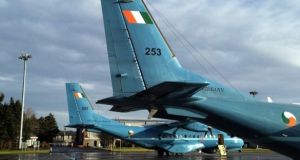 The Defence Forces corries out some 1,600 random tests on serving personnel in 2016.

A newly-qualified Air Corps pilot is expected to “retire” from the Defence Forces on Friday having failed a drug test.

The officer, a male lieutenant with limited flying experience and who has not been named, is the first officer in the Defence Forces to fail such a test.

It is understood that the man was selected for random testing last Monday when he reported for duty at Casement Aerodrome at Baldonnel in Dublin.

It is understood that he responded by stating that he had taken cocaine over the preceding weekend.

The man was placed on leave and a subsequent test registered “unclear”.

The sample has since been sent for further analysis. However, as the man has acknowledged his conduct, it is understood that his career in the Defence Forces is over.

In a statement, the Defence Forces said the highest standards were demanded of all serving personnel.

“The Defence Forces demands the highest standards of personal and professional behaviour of its personnel and, as part of ensuring this behaviour, conducts Compulsory Random Drug Testing (CRDT) of all employees with approximately 10 per cent of the organisation tested annually,” the statement said.

It continued: “As part of a recent Compulsory Random Drug Testing in Casement Aerodrome, Baldonnel, one member of the Defence Forces tested as “unclear” for a controlled substance. An unclear test is not necessarily an indication of a positive result.

“From a procedural point of view, what occurred on Monday was a screening test. A screening test produces two possible outcomes : Clear or Unclear.

“A sample which tests as ‘Unclear’ is then split into an A and B sample and both are sent to a laboratory for a more detailed confirmatory test. Confirmed positive testing for controlled substances will result in disciplinary procedures being brought with a range of potential sanctions, up to and including, dismissal from service.”

Last year, the Defence Forces corries out some 1,600 random tests on serving personnel . The failing of a test in this instance has been greeted with dismay, especially in the Air Corps, but has also served to reinforce the view that the system of random testing is effective.