Q&A: What has the Fennelly Commission been investigating? 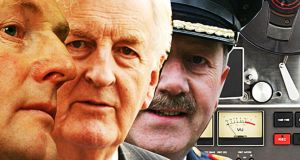 Fennelly Commission: the issues that Mr Justice Nial Fennelly (centre) was asked to investigate included the resignation of Garda commissioner Martin Callinan (right) after the intervention of Taoiseach Enda Kenny

What did the Fennelly Commission investigate?

Emergency calls to Garda stations have been recorded for many years. However, in 2013 the authorities became aware that the practice was much more widespread involving the recording of other calls, including some between suspects and their solicitor – a clear breach of lawyer-client privilege which protects any communications between a suspect and their lawyers.

The main issues investigated were:

– the operation of telephone recording systems to record calls, other than 999 calls, at a large number of Garda stations over many years;

– the specific implications of the taping related to the Garda investigation into the death of Sophie Toscan Du Plantier in December 1996; and

– the sequence of events leading up to the retirement of former Garda commissioner Martin Callinan in March 2014.

How did the recording of telephone calls come to light?

The west Cork-based journalist Ian Bailey was investigated over a long period in connection with the murder of Toscan Du Plantier, a murder which remains unsolved. Mr Bailey was never charged with the murder, but later sued the State over the investigation. He lost the case, though he has lodged an appeal.

During the discovery process in 2013 – the legal procedure under which relevant documents have to be handed over from one side to another before a court case in a sworn affidavit – in the case taken by Mr Bailey, recordings of conversations relevant to the case were found at Bandon Garda Station. Gardaí handling the discovery process notified their superiors; one of the first senior officers to be informed of the recordings was the present commissioner (then deputy commissioner) Noírín O’Sullivan. Though management seemed unaware of the process, the inquiries within the Garda ascertained that the recording was widespread throughout the Garda station network. The recording capability had been upgraded significantly in 2008.

The then commissioner Martin Callinan took steps to stop the process, and to preserve the recordings and informed attorney general Máire Whelan about the issue.

Though her officials advised that she should inform the minister for justice (then Alan Shatter), Ms Whelan never did. Instead, the first the government learned about the issue was when Ms Whelan telephoned the Taoiseach one Saturday morning in late March 2014, and told him an important matter had come to her notice that she did not wish to discuss on the phone.

She met him on the Sunday evening, and briefed him on the subject, giving by most accounts – including her own, though that account she later changed – a highly alarming version of the story, raising the prospect of widespread illegal actions by gardaí with serious consequences for some existing convictions. Mr Kenny was horrified.

What did the Taoiseach do?

The following day he sent the secretary general of the Department of Justice Brian Purcell to the Garda commissioner’s home with the message about how concerned the Taoiseach was. A few hours later, on the Tuesday morning, the commissioner resigned.

This series of events has already been reported on in an interim report of the commission, published in 2015. It found that while the Taoiseach may not have intended to sack the commissioner, it was understandable that the commission might have come to the conclusion that he was being asked to consider his position.

What else did the interim report say?

So what did the final report find?

It’s a very long report, running to 700 pages. It describes the background to the practice, how it evolved over the years, including converting to a digital system in 2008.

The system for recording 999 calls changed in 1995, when a new system was established. However, the senior Garda officer who authorised the change did not know what he was doing – essentially he made a major change in Garda policy, involving the institution of a new system for recording non-emergency calls, by mistake. The officer, who is not named in the report, did not know what he was doing.

After that non-emergency calls to the main numbers of 20 divisional Garda stations outside Dublin were recorded. However, when these calls were transferred to extensions, the recording ceased. In four stations, apparently by mistake, more extensive recordings took place. One of these was Bandon Garda station where the recordings relevant to the investigation into Toscan Du Plantier’s murder were made.

However, although a huge amount of data was preserved by the recording process – unlawfully – the commission found no evidence it was abused or even accessed by gardaí. In addition, the whole thing was carried on without any knowledge on the part of Garda management. Fennelly clearly finds this astonishing but he also has no reason to doubt it.

Crucially, there is no evidence that solicitor-client privilege was compromised, and none that any convictions were made unsafe.

So what are the implications of the report?

For successive generations of Garda management the findings are quite damning – but of their competence, rather than their probity.